God’s Provision In the Train During the Earthquake 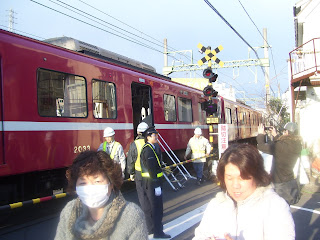 Here’s the train that we were riding in when the earthquake struck in Japan. You can see the ladder in the center of the photo that we climbed down to get out. God was so good to my sister, her grandson, and me in so many ways. I’ve actually wondered whether we didn’t feel the earthquake as much as others because the train shock absorbers may have absorbed some of the motions of the earth. I don’t know if that’s true, but regardless, we felt safe enclosed in the train.

I was concerned, though, for as you can see, there is some sort of electrical pole with wires which was right beside and over our train car. As it swayed and lurched, I did wonder if it might fall on us. Would that be dangerous? I didn’t know. But it stayed solid as did everything we saw, since we were at least 200 miles from Sendai where the tsunami came ashore. We didn’t see any damage.

The Lord provided for us in so many ways. For the first hour that we waited in the train, my sister’s 17-month-old grandson, Jack, was content to sit in the stroller. We figured we’d be underway in a short time. But the aftershocks came one after another. One time the engine started up and we thought, “OK, we’ll go on now.” But then another strong earthquake hit and the engine shut down.

After that first hour, we thought we might as well let Jack out of the stroller and God provided a little 6-year-old Japanese boy, Kokie, to play with him. He and his mother were in our train car and even though they didn’t speak English, we smiled back and forth and tried to communicate. God also provided a Japanese woman nearby who spoke limited English and she would try her hand at her English to interpret. Kokie loved Jack’s attention and they followed each other around in the car during the second hour of being in the train.

Finally, a train conductor came through the car and brought people from the back cars toward the front and ushered us to an open door. We climbed down the ladder but didn’t have any clue where we were or how to get to the next station or home. We asked the conductor about reaching the next station “Jimmuji” which is where we would get off, but he didn’t seem to understand.

Within a few seconds, a Japanese woman said to me in very good English, “Are you going to the Jimmuji station?”

Then began our 45 minute trek along busy streets with little sidewalks until we neared the Jimmuji station. Karen recognized the street that would take us to her daughter’s home and we said goodbye and “arrigato” to our friends. God had protected us. In fact, I felt more tense walking along those busy streets than feeling the earth shaking.

We arrived at my niece’s home at 5:30pm to discover the electricity was out. We had just enough time to find some candles. We couldn’t find any matches but Karen thought of using the gas range and we had just enough daylight left to feed Jack and put him to bed. Karen made us a salad in the candlelight and we tried to play a game of Scrabble as best we could with limited light. Yes, we are Scrabble fanatics!

God took care of us. As my sister and I had walked along those busy streets, at one point, we both were in tears feeling as if God were enclosing us in His cocoon of love and protection. He was our “Ladder” out of the train, the kind people who led us, and the timing of arriving before dark.

I know that many were not aware of God’s protection but He still calls to them to come to Him. He wants them to know Him.