Would You Buy the T-Shirt? 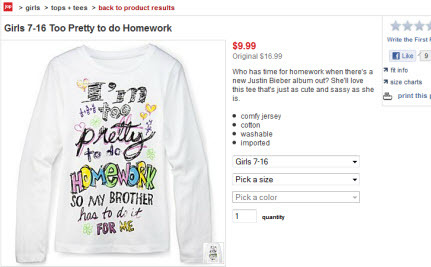 On the news this morning, commentators were giving their opinons about JCPenney pulling off their shelves a girl’s T-shirt that said, “I’m too pretty to do homework so my brother has to do it for me.”

Their points were that girls were being encouraged to be selfish and self-centered by being described as pretty. They believed there was too much emphasis on girls being called princesses or encouraged to find “their value in their looks, not their brains”–as one blogger wrote.

Although JCPenney has evidently pulled the T-shirt from their website because of the uproar by many, an informal poll of Fox News audience members indicated almost 60% of them saw no problem with the t-shirt. Even the newscaster was surprised by that number.

As I listened to the comments, I wanted to shout, “And well, how about the integrity issue?” No one seemed to notice that one of the points of the T-shirt was that someone would lie and say that the homework was their own–when it was someone else’s. That to me is even more important. I think you can tell a young girl she’s pretty and she’s a princess–a daughter of the King–without encouraging selfish and self-absorption. (Obviously, we Christians have a different perspective of being a Princess–because we women are!) But to indicate it’s OK to have someone else do your homework and it’s OK!? Isn’t that something to get upset about? That’s why I wouldn’t buy the T-shirt. It’s a character issue.

Which issue is more important to you? What do you think?