Life in a Greek Village 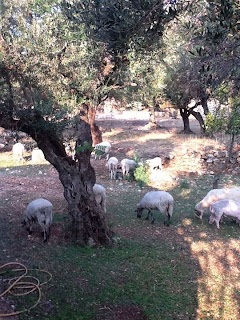 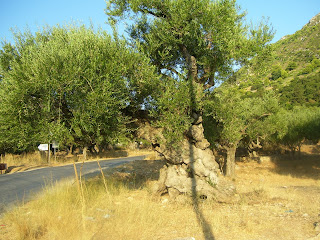 We are ministering on an island called Zakynthos, a six hour drive from Athens (which includes an hour-and-a-half ferry ride.) The village of Lithakia is specifically where Taki and April live. It’s really been a fascinating experience to be among the people. We have ministered in many places around the world but this is the longest we’ve been in one place and it also feels like we’re a part of the village life. For instance…

At 4:30am, the roosters start crowing. We are staying in a 700 square foot cottage and our neighbors have chickens, roosters, and a pig. Nearby are a pen of turkeys and a dog that loves to bark–that is, the dog likes to bark.

We live at the top of the town, thankfully only 200 feet from the village well where we get our drinking water–along with the people of the town. From 9am to 1pm, the spigot is turned on and we take our large water bottles over to be filled. But don’t feel sorry for us. There is running water in the house for bathing and washing dishes from a underground well.

The Greeks wake up early, take a siesta from 2pm to 5:30pm when everything closes, and then re-open until 8 or 9pm. Then they eat dinner and stay awake until midnight or the early hours of the morning. We’re grateful that our host family has been eating dinner around 5 or 6pm. We’re usually in bed by 9pm or 10–unlike everyone else.

Olive trees are everywhere since the main cash crop is olive oil. But there are also grape vines. Yesterday I saw an old cart being driven by an old man in a tractor, hauling what must have been a ton or two of grapes still in bunches. The cart must have been pulled by a team of horses only a few decades ago–it looked that old. I kicked myself because I didn’t have my camera with me. But you’ll notice my photo of an olive tree that is most likely 2,000 years old. To think it was a young sprig when Jesus walked on the earth is an amazing thing.

The people are friendly and we’ve learned the Greek words for some phrases like “thank you,” “good morning,” “good evening,” and “goodbye.” I’m sure those who see us walking the third of a mile to Taki’s house every morning and home every evening are curious as to what we’re doing. They are used to seeing tourists driving ATV quads through the town on the narrow roads, but an American couple walking back and forth I think is unusual. Nearby at the beach, hotels and resorts host tourists but now that it’s October, the tourist season is almost over. The resorts will shut down completely soon.

Most of the people work 1-2 jobs (sometimes 3), seven days a week, throughout the tourist season (May-October). Then during the winter, they’ll work on their own farms or live off their summer earnings. We see a lot of gardens as we walk along and April explains that the food in the stores is local produce. If it’s not the season for cantalopes, there are no cantalopes to be bought. April and Taki eat a lot of food from their own farm, including chickens, turkeys, eggs, pork, and vegetables.

Since April is American, she celebrates the American holidays. The turkey on their farm hasn’t yet been told he’ll be Thanksgiving dinner. Larry and I are city folk, but when we wanted to do something to try to help on the farm, about the only thing we could do was pick the last of the garbanzo beans in the garden. It really was a lot of work to pick the beans off the stems and then break the actual bean out of the pod for a soup that evening. But I wonder if the soup tasted even more tasty because we’d had a hand in making it happen.

Most of Taki’s relatives live nearby. His own home (which he built) is an extension of his mother’s home. She lives upstairs and his brother lives downstairs from her. Other brothers and cousins, aunts and uncles live on the same street or within close walking distance. He likes to joke that everyone in the village is a near or distant relative, like 10th removed.

Enjoy the photos. I hope they give you a little taste of village life. We’re enjoying it.