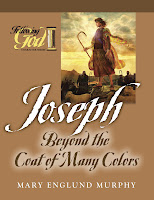 I’m so pleased to make available a copy of a new Bible study by Mary Englund Murphy entitled Joseph: Beyond the Coat of Many Colors. This book won the 2012 SELAH award for best Bible study.
To put your name into the raffle for an autographed copy of Mary’s book, please leave a comment on my blog or email me at kathyspeak @ dc.rr.com (omit spaces) by this Thursday morning. I’ll draw a name on Thursday afternoon.
I think you’ll be intrigued by Mary’s emphasis in this book. It’s a bit unique. Here’s an interview with Mary and then check out her speaking and writing ministry at www.lookingglassministries.com
There are many books or a single chapter in books, but few Bible studies are devoted entirely to his story.
Many of us who were raised in church have what I call a Sunday school or flannel graph view of Joseph and therefore we miss many of the treasures that are found in a deeper study of his life. We often visualize him as a little boy dressed in a multi-colored striped bathrobe. This Bible study goes way beyond all the preconceived notions about Joseph.
Joseph’s story is found in the Old Testament. He was the eleventh, and favorite, of the twelve sons of Jacob and was literally despised and hated by his brothers. When Joseph was seventeen years old, his father gave him the famous coat. The brothers plotted to murder Joseph but ended up selling him to slave traders. He spent thirteen years as a slave and a prisoner in Egypt until Pharaoh heard that he could interpret dreams. When Joseph gave Pharaoh God’s interpretation he was promoted to second in command of the nation. Joseph saved the country from famine and eventually was reunited with his family and brought them to Egypt.
We tend to view Joseph from an overall perspective – the favored child, the multi-colored coat, some conflict with his brothers, a few rough years in Egypt, then promotion to wealth and prosperity. Sometimes we think he persevered with virtually no emotional issues, but the Scriptures indicate that he did have challenges with the same things we struggle with like shattered hopes and depression. Joseph was a great man but he had feelings just like the rest of us.
Joseph’s father Jacob simultaneously had two wives and two concubines, and all four women produced children. Though culturally acceptable, there were jealousies and conflict galore. Joseph’s family gave new meaning to the blended and dysfunctional family. This Bible study addresses many of those issues.
I was born into a broken/blended home. My parents were married a total of 10 times. I’ve had 3 stepfathers, two stepmothers, and 21 step, half and adopted brothers and sisters. In fact, my own family background is one of the primary reasons I decided to write about Joseph; I can relate to him in so many areas.
His story is a wealth of information on raising children, dealing with jealousy, disappointments, peer pressure, sexual purity, employee/employer relationships, and what to do when you feel like God doesn’t care.
Definitely not! It can be used for individuals, group Bible studies, and Sunday school. I recently heard of a couple who co-taught it in their couple’s class. You can do the study in eight weeks but I recommend taking it slow and more in-depth.
To understand that God knows the end of your story just as He knew the end of Joseph’s. Don’t give up; remember God is working in your life with purpose just as He did in Joseph’s. God isn’t finished with you yet.