Who Is Accusing You Today? 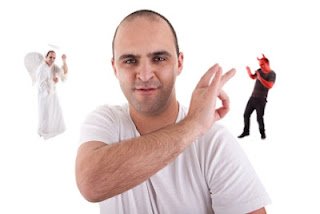 We’re continuing a series about how Satan accuses us. It’s a heavy subject but one we need to be aware of and actively bring under God’s covering. Many times we aren’t aware Satan is accusing us. We may hear “messages” in our mind like, “I’m so stupid.” Or “See? She hates me.” Or “I have every right to be bitter.”

Such thoughts seem so reasonable and right. Or we may think it’s our own sinfulness being revealed–and there is that possibility. But there’s also the possibility that Satan is throwing one of his flaming missiles at us (Ephesians 6:16). If we don’t see his tactic, we’ll feel condemned because, “See? I always think the wrong thing. There’s no hope for me.” Or we may agree with the sinful message believing it to be the right way to act (IE bitterness seems so appropriate). Oh, how we need discernment and to be alert!

Zechariah 3:3-7 alerts us to one of the ways Satan accuses us.

Joshua’s clothes were filthy. So the angel told some of the people to remove Joshua’s filthy clothes. Then he said to Joshua, “This means you are forgiven. Now I will dress you in priestly clothes.” I spoke up and said, “Also put a clean priestly turban on his head.” Then they dressed him in priestly clothes and put the turban on him, while the Lord’s angel stood there watching. After this, the angel encouraged Joshua by telling him that the Lord All-Powerful had promised: If you truly obey me, I will put you in charge of my temple, including the courtyard around it, and you will be allowed to speak at any time with the angels standing beside me. (CEV).

The Jamieson-Fausset-Brown Bible Commentary says this: “Satan suggested to the Jews [who] so consciously polluted a priesthood [that] people could offer no acceptable sacrifice to God, and therefore they might as well desist from the building of the temple. Zechariah encourages them by showing that their demerit does not disqualify them for the work, as they are accepted in the righteousness of another, their great High Priest, the Branch (Zec 3:8), a scion of their own royal line of David (Isa 11:1).” (red highlight added).

So one way Satan can accuse us is through discouragement about our service for the Lord. He whispers so confidently, “Only perfect people should serve the Lord. Your sin disqualifies you from serving God.”

Just think of the repercussions if we believe Satan’s sinister lie? God would not be served at all! Ever! Because no one–nada, nobody, absolutely not a single person ever–qualifies to serve God. We’re all messed up and can only serve in our inadequacy and weaknesses through His strength and power.

That’s what’s so wonderful about the honesty of the Bible: it contains so many stories of flawed men and women who God used anyway! Just pick one that didn’t. Even Joseph who seems the best was beset with pride. You and I are not alone in our disqualification and Satan doesn’t want us to think the truth: that God wants to use us anyway!

Is he whispering to you in some way, saying you should get your act together before you can be used by the Lord? Rebuke him now! And thank the Lord that Ephesians 2:10 says God has already designed the opportunities for serving Him and He knows we’ll even do it imperfectly (Philippians 1:6).

Here’s another insight into this passage from Gill’s Exposition of the Entire Bible: “Such a sordid dress was the habit of persons arraigned for crimes. It was usual, especially among the Romans, when a man was accused of, and charged with, capital crimes, and during his arraignment, to let down his hair, suffer his beard to grow long, to wear filthy ragged garments, and appear in a very dirty and sordid habit; hence such were called “sordidati”: nay, it was not only customary for the accused person, when he was brought into court before the people to be tried, to be in such a filthy dress; but even his near relations, friends, and acquaintance, before the court went to voting, used to appear in like manner, with their hair disheveled, and clothed with garments foul and out of fashion, weeping and crying, and deprecating punishment; thinking, by such a filthy and deformed habit, to move the pity of the people.”

Sadly, other people can even join our ranks of believing Satan’s lie that we are disqualified and we need to somehow earn the right to serve God.

Look back at Zechariah 3:3-7 (above). God provides the cleansing of sin and the new clothes. We don’t have to convince God to give them to us; they are offered freely because of Jesus’s death and resurrection. We become clothed in Jesus’s robe of righteousness. That’s what qualifies us to serve. It’s not something we earn. What a relief!

Pay attention to any fears about serving God. You may be cooperating with Satan’s wicked lies and not recognize it. You can claim God’s cleansing and put your “in-Christ” clothes back on and serve Him confidently!

P.S. I still have not been called into court to be considered for jury duty.