Why Can’t I Serve on a Jury? 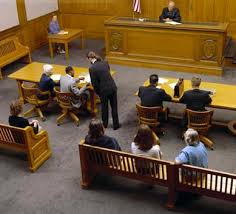 I’m on jury duty standby this week. I don’t know how your area works jury duty, but in my area, I check in every evening to see if I’ll be called in for the next day. That can keep going for up to five days.

I know you’ll think I’m strange (well, I guess that’s already been found true–but not in a court of law), but I’ve always wanted to serve on a jury and have never been chosen. I think it would be very interesting. The problem is from the first time I was required to report in for jury duty, I’ve always been the wife of a policeman, or currently, the wife of a retired policeman. As soon as they ask who knows a policeman and I tell them my relationship, I’m outta there. In fact, for the last two years, the same defendant’s lawyer has “rejected” me. I know you’re not supposed to feel “rejected,” but I do. I almost want to beg them to let me serve. “I’ll be impartial. Honest, I will.”

But I know in my heart, I’m prejudiced. Even though I know policemen make mistakes, I’ve heard Larry’s stories our total 42 years of marriage and the accused is guilty!

So in the past, when I’ve walked into the courtroom and the defendant(s) was sitting there, all cleaned up and dressed nicely, my immediate reaction was: “Guilty–even though you got a haircut!”

(Now I know you’re wondering how I’m gonna turn this into something spiritual. Sorry I’m taking so long….)

Interestingly, I’ve been reading in Zechariah 3 about people who were accused of being guilty. (How’s that for a transition?) Zechariah 3:1 says, “Then he showed me Joshua the high priest standing before the angel of the LORD, and Satan standing at his right hand to accuse him.” (NASB). In this verse, Joshua represents the whole Israelite nation and God has just taken them through 70 years of punishment because they were…guilty!

And guess who is rubbing their faces in it? Satan! Satan is standing next to Joshua and stabbing his dirty little finger at him, boldly telling God how rotten His “child” is and how he deserves to forever be forsaken.

I’ve battled believing that very accusation of Satan all my life. Even as a little girl, I felt a load upon my spirit like a weight of guilt and condemnation. My perfectionism and the way I viewed life encouraged me to require perfection in order to be acceptable and loved. When I was thirteen, I took a cleansing bubble bath at the stroke of midnight on New Year’s Eve. I prayed, “God, forgive me for everything I’ve ever done wrong, and I vow to You I’ll never do anything wrong again.” I truly believed I could! And when I didn’t, the load of guilt and condemnation increased. There was no hope.

Praise God, five years later, I heard the Gospel clearly for the first time and received God’s forgiveness through Jesus’s death on the cross for me! What relief! The burden was gone, but Satan’s attacks continued. He still tries to capture me in his lies that I’m accused and already found guilty!

I’ve written before about Revelation 12:10 where Satan is identified as the Accuser. But I was surprised to see another example of Satan being the Accuser in Zechariah 3. I guess I didn’t realize–or have forgotten–how many times Satan is featured as the Accuser. So for several posts, I’d like to examine the ways he accuses us–because it’s happening often within us.


Next time, we’ll continue gleaning from Zechariah 3. If you’d like, you can comment about how the accusations of Satan make you feel.