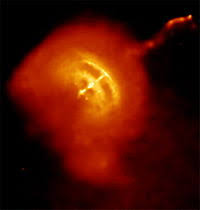 In Job 38, God questions Job by pointing out His own sovereignty and control. He says, “Where were you when I laid the foundation of the earth? Tell Me, if you have understanding,Who set its measurements? Since you know. Or who stretched the line on it? On what were its bases sunk? Or who laid its cornerstone, When the morning stars sang together And all the sons of God shouted for joy?” (verses 4-7, red added).

I’d never really paid much attention to God describing how the stars sang but while recently reading Indescribable by Louie Giglio and Matt Redman, I found out stars really have a voice!

Mr. Giglio writes, “Who knew that God has His own string section!”

For instance, the photo above shows the Vela Pulsar, which is a neutron star and here it’s seen after a supernova explosion. The crossbow shape is caused by hot gases that surround the star. And guess what? This star sings! Or, more accurately, it pulses, which creates a kind of melody. Other pulsars sound like violins.

Mr. Giglio explains, “Eight hundred light-years from Earth, the Vela Pulsar is a highly magnetized neutron star. Exploding into a supernova at death, the Vela collapsed back on itself as a magnetic entity with a force that causes it to rotate ten times per second on its axis.
“As it rotates, a radio frequency is emitted (note the blast to the top right of the image). While the whirling Vela is striking to look at, it’s incredible to hear as it makes its rhythmic, staccato beat nonstop–a sound we can hear after it travels 800 X 5,800,000,000,000 miles.”

I think it’s far away.

Would you like to listen to God’s string section? Click on here and enjoy. Just be sure to sing along in praise to God!