We Met Because I Was Lost

We met because I was lost. That flit into my mind yesterday morning as I thought about it being my beloved’s birthday. Larry, my husband, celebrated his birthday; we celebrated forty-four years of marriage on June 20th; and my birthday is Saturday. We always have lots to celebrate in June. 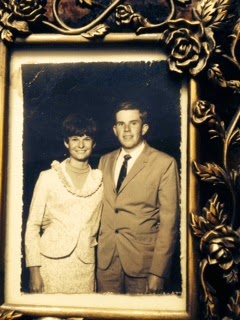 It was 1966 and I was a high school senior. The water polo team for my school, Downey High School in Downey, California, was going to be playing in the state championship. I’d never been to a water polo game but my friend and neighbor, Margie Tweedie, thought it would be fun to see one. And as I thought of his birthday, I reflected on how we met and this statement flit into my mind: We met because I was lost. I hadn’t looked at it before like that but it was an intriguing thought.

So Margie and I road the school bus to a distant school which had a huge indoor pool. Since it was a championship game, lots of people came from many schools, and after Margie and I got off the bus, we were enveloped by a mass of kids and adults trying to make our way into the pool arena area.

Before I knew it, I was lost. Well, only in the sense that I suddenly looked around and I couldn’t see Margie anywhere. Where had she gone? Or maybe, where had I gone to be separated from her?Regardless, I was by myself.

As I looked around searching for her, I saw someone I knew. It was Frank Dawson from the Episcopal church I attended. Oh, good, someone I know. I’ll talk to him.

I went over to him and said hi when I realized the Cute Guy standing next to him was a friend of Frank’s. Frank introduced me to the Cute Guy as Larry. OK, Cute Guy has a name. Good. Tweet That! Larry and Frank explained to me that they were both on the water polo team at Warren High school, the other high school in Downey. Warren High and my school were rivals.

After chatting a while, Margie still hadn’t appeared in the mass of humanity, so when everyone started migrating to sit down, it just felt natural for the three of us to climb up the bleachers together. I found myself sitting next to Larry and I quickly hatched my plan. Since I’d never been to a water polo game, I put 2 and 2 together:

When the game ended (I can’t remember who won but Larry remembers), we climbed down from the bleachers and the magic moment arrived for 4! Larry turned to me and I knew the magic words would come out of his mouth: “I’d love to see you again. What’s your telephone number?”

Instead, he said, “Thanks for the nice time. See you.”

I weakly replied, “See you.” I felt the blood drain from my face.

Wait! Where was the 4? I was so dismayed and disappointed. Yes, that’s just like you, Kathy. You always get the fish on the hook, but he jumps off.

I didn’t know until later (yes, obviously, Larry did call and ask for a date later) that he was afraid to ask me for a date right then in front of Frank. He didn’t want to be embarrassed if I told him no. Hello! I had just paid rapt attention to him for several hours! And he thought I wasn’t interested?!

Well, I had lots to learn about understanding a man–and 44 years of marriage later, I think I understand his motivation Tweet That! at that time.

But regardless, I’m so glad I got lost in that crowd. I’d like to tell Margie the result but I can’t find her. Wouldn’t that fun to tell her?

Is there a spiritual application? I’m not sure and I don’t want to stretch a Bible verse to fit.

Maybe you’d like to share the story how you met your husband or tell us a Bible verse that you think fits.

But I did find this intriguing verse:


“For I am going to raise up a shepherd over the land who will not care for the lost, or seek the young, or heal the injured, or feed the healthy, but will eat the meat of the choice sheep, tearing off their hooves.” (Jeremiah 11:16 NIV)

God sometimes has to arrange circumstances so that we will seek Him. Although I knew I was lost in that crowd at the water polo game, I didn’t know I was spiritually lost. I attended church and thought I was a Christian because I was trying to become perfect so that God could love me. I wasn’t assured of going to heaven–I thought I could only find out after I died if my good deeds had earned enough favor with God for Him to love me.

But because I was lost in that crowd, separated from Margie, I met Larry. I started dating him, attended his church, and I heard the clear message there that I didn’t need to earn my way into heaven. Jesus’ death on the cross and spilling His blood to cover my sin was sufficient for me to be accepted by God. But I did need to receive Him as my Savior and Lord. And I could be assured of going to heaven. Talk about the lost being found!


Psalm 119:176 describes me at that water polo game: “I have strayed like a lost sheep. Seek your servant, for I have not forgotten your commands.” (NIV).

How fascinating that the Psalmist says, “God, seek me!” It’s God’s work. Tweet That! I’m sure there are other verses where we seek God, but in this verse, we’re pleading for God to seek us!

And in one aspect, He does that by watching over us. I didn’t realize that God was watching over me as a high school student more than I could ever imagine. Like the dog above who is standing guard over those sheep, I had a Savior looking out for me, waiting for me to see my need and forsake my determination to save myself.

I know loved ones who aren’t seeking God and are lost, yet I pray that God opens their eyes to see that God is seeking them and watching over them more than they realize.

The photo above is of Larry and I at Disneyland when we attended his all-night party after graduation (six months after we met). Little did we realize, standing in front of the lake where Tom Sawyer’s Island is located, that we were starting a history that has lasted 50 years.

We met because I was lost. That applies to Larry in my life and that applies to God in my life. What surprises you now about a past event that has become a momentous event where you were like a lost sheep, yet God was watching over you? Please share in the comments.