I Lost My Earring!

I reached up to touch my ear lobe and felt the space that should have held my earring. Then I felt my other ear lobe and confirmed the matching earring was there.

Oh no, my cubic zirconia post is missing. I tried to rehearse the morning but couldn’t remember specifically putting the post in. I thought I did but who knows, maybe I was distracted and forgot to put it in. Then I realized that I was wearing a very fluffy sweater that the earring could have gotten caught in. I examined what I could while wearing it. But nothing.

I wasn’t home so I made a mental note to check when I returned home.

And I did. It wasn’t in my jewelry box. And so began the search. Among all my earrings; on the floor; the sweater again. But nothing. It could be anywhere, including the place where we had spent the day. I finally concluded it was gone. Thank heaven, it wasn’t a diamond but still, it was a gift from Larry from many years before.

But I knew even this God would want me to surrender to Him. I could keep my eye trained to look for it but it was up to Him. If He wanted me to have it, I would find it. Just like all of life.

As I talked to Larry about options for a replacement, he asked, “Did you check the car?” 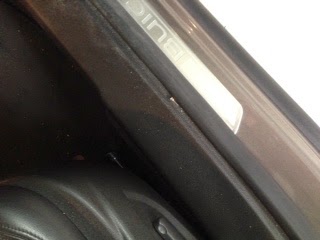 Oh, that’s right, I intended to check it. I grabbed the little flashlight and headed out to the garage. I opened the door to the car and looked down.

The earring post was in a little ridge between the door opening and the seat. If it was going to go missing, it was in the safest possible place. I would never step there; I always step over that area. It could have been so many other places where it could have gotten trampled or completely lost. But it was safe and protected in that little crevice.

The next day as I heard from a dear friend that she was going in for some tests for possible cancer, I thought of my earring. I sent her the photo and assured her that God held her protected in His loving care regardless of what happened. As it turned out, there was no cancer but it was a scary time of going through the tests.

What verse does all this remind you of? I was thinking of one (that I can’t remember enough of to find it) but you most likely have one that ministers to you. Would you share it?