The winner of the book drawing for Dealing with the Elephant in the Room by Mike Bechtle is Mona!!!! Congratulations! I’ll email you.
Although there weren’t comments on the blog post, I received several entrants through email, so Mona, I know you’ll be benefiting from Mike’s book!
Now here’s a post about worry. I know no one ever worries but me but I think I’ll write about it anyway.
I’ll never forget that Christmas Eve in the Los Angeles basin. I was eight years old and we had gone to my grandparents’s home for our celebration. But when we left their home around 9 pm, a dense fog had socked in the area—so thick we couldn’t even see within ten feet of the house. We climbed into the car and headed down familiar streets for the thirteen miles to our home…slowly. Very slowly. My mother got behind the wheel and my father walked directly in front of the car trying to see ahead. At times, he literally disappeared into the fog and my heart leapt in my throat. I was terrified! And what made it worse was that we heard voices of people who were crying out, in seeming pain.
“Mom!” I said, my voice rising in nervousness. “Those people need help! Do you hear them?”
“Yes, Kathy, I do,” my mom replied. “But it’s just kids playing a joke. It’s really OK, sweetie.”
I tried to calm my palpitating heart but I just sat in the backseat, worried! We made it home safely that night but I’ve never forgotten that experience.
Sometimes when I’m worried, I feel like a fog of fear and anxiety is swirling all around me, blocking out the ability to think clearly and trust God. It quickly fuels responses like complaining, grumbling, being self absorbed and selfish, or making a quick decision that isn’t led by God.
As I begin to worry, I remember that I’m a Christian and I’m not supposed to worry. So my defense mechanisms kick in. I reason:
But then honesty rears its unwelcome head, and I am honest.
OK! I’m worried!
I’ve gone through this scenario many times. It’s so easy to deceive myself into thinking I’m not worried—I’m just thinking too much! Besides, don’t I need to plan just in case something terrible happens? But at a certain point, thinking, wondering, being concerned, mulling, or being bothered becomes worry! And at that point, I’m not trusting God with my whole heart.
Now, there is indeed a difference between fear, careful thought and worry. Fear can be a legitimate emotion which is God’s warning signal to do something—QUICK! (As in, that bear coming towards you looks really hungry!) Fear can turn into worry if we (a) don’t take action (like scream or play dead!) or (b) release control because we have no power over the situation or person (that doesn’t apply to the bear analogy!).
Fear in itself is not sinful when it’s based in something legitimately dangerous. If your daughter is late getting home from a date, you might feel fearful and it is based on something legitimate. But it doesn’t have to turn to worry as you pray for her safety.
Careful thought is what our mind does when faced with an uncertain situation or problem. That’s to be expected. God wants us to use the mind He’s given us.
But as we try to figure out the solution, our careful reasoning can easily slide into worry if we don’t turn our attention to God, ask for His input and trust Him. If your daughter is late getting home from that date, careful thought is necessary and you might take the action of calling her cell phone.
When the Bible talks about worry, it’s not referring to fear or careful thought. Worry is not the same as insightful planning or feeling responsible for something that is legitimately ours.
Tweet this: Worry is when our thoughts are wrapped in a haze of anxiety that discounts God’s ability to help us.
Merriam-Webster Dictionary (online) says that at its source, the word worry has the idea of choking and strangling, along with torment. We begin to worry because we don’t turn to God or if we do, we don’t release the fear to Him. If your daughter is late getting home from that date, you might pace the floor and imagine her already dead in an auto accident. And when she walks in the door, your worry may turn into an urge to kill! That’s when worry is choking us and controlling our actions!
Tweet this: The first step toward trusting God more when we’re tempted to become worried is be honest.

Don’t live in denial–that only buries the distrust and can’t be dealt with. But buried worry is like a volcano which is rumbling but hasn’t exploded. It will in time and so will worry. 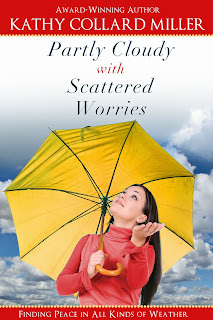 So be honest and pray! That’s what Philippians 3:5-6 is talking about:
Be anxious for nothing, but in everything by prayer and supplication with thanksgiving let your requests be made known to God. And the peace of God, which surpasses all comprehension, will guard your hearts and your minds in Christ Jesus. (ESV)
This excerpt is from my book Partly Cloudy with Scattered Worries: Finding Peace in All Kinds of Weather. Here’s where to order: http://amzn.to/2qr4xwA