How Patient Do You Think God Is? 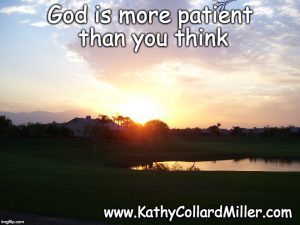 It’s easy to think that such determination will bring us success. We may think that God demands such commitments. But have you noticed that when we can’t follow through, we get discouraged and give up? Even thinking God has given up on us also?
The good news is that God is more patient than we think. (Tweet that!)
And His patience allows us to grow in our sanctification “little by little.” He’s not impatient with us when it takes us time to overcome our struggles.
I Timothy 4:15 tells us that. It says, “Take pains with these things; be absorbed in them, so that your progress will be evident to all.”
Vine’s Dictionary says the Greek word “progress” is the idea of a pioneer cutting his way through the brushwood. (Tweet that!)
How does the pioneer do that? Little by little. He doesn’t have a mile-wide ax to cut down a swath big enough for his house in a day. Instead, he takes one step and takes one chop in the brushwood with his ax. He progresses one step and chop at a time.
That’s the kind of “progress” the Apostle Paul is encouraging Timothy to have. Step by step. Chop by chop. Little by little.
One of the principles I write about and speak about to give the biblical perspective of this is what I call “The 1% Principle.”
Tweet this:
Instead of expecting 100% growth, we can make small goals—like 1% growth.
So let’s apply that to the steps we wanted to make above.
Such thinking in the power of the Holy Spirit enables us to make more progress because we’ll be persistent rather than get discouraged and give up.
Reaching a 1% goal encourages us and empowers us to continue trusting in God for the progress He desires. And we’ll give Him the glory for the progress we’re making rather than pour contempt on ourselves because we haven’t reached perfection.
What 1% goal does God want you to make? I believe you’ll make greater progress that way than forming unrealistic expectations.
Just remember that pioneer’s ax when you think God is impatient with you.