You Don’t Make Anyone Feel Any Way

Have you noticed how often we can say something like, “I don’t want to make her feel … sad…angry…left out…upset…” The possibilities are endless. As a result, we become very careful and try to figure out how to avoid “making” someone be in some sort of emotional pain. Or the opposite: we insincerely say or do something just because we know the person will feel good and then we’ll feel good that we contributed. Either way, we’ve left out thinking of God’s desires because the response of the other person pushes away seeking Him. 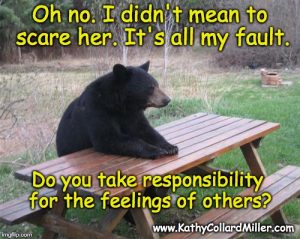 I remember one of the many ways I concluded I had the power to make someone feel bad or feel good. (Tweet that!)

One Saturday morning when I was maybe ten or eleven, I walked home from the bowling alley in a neighborhood I knew well. Every Saturday morning I bowled on a children’s league. In those days (a long time ago!), it was actually safe to walk the streets, although my parents had always warned my brother, sister, and I to not talk to strangers. But it was almost not needed, the world was a different place.

I was walking along happily even carrying a box by it’s handle that held my bowling ball which had my engraved initials. I was very proud of my engraved bowling ball. Then I became aware of how a car driving toward me on the same side of the street slowed down and stopped, just a few feet from me. The driver leaned toward the passenger side of the car and tried to get my attention, saying something. The pounding in my ears blocked out the words as I panicked. The stranger I had been warned about was actually here and I knew I was in danger. I ran! I don’t know why I didn’t drop the box.

After I’d run about a block, I slowed down and looked behind me. No car. No man running down the sidewalk toward me about to snatch me away. I stopped completely and looked around more. No man. No one around at all.

Hmmmm, I thought. This is strange. I guess there wasn’t any danger after all. “Oh, Kathy, you are so stupid and silly. Look! You weren’t in danger at all. You made a big deal out of nothing and ya’know what? I bet you made that man feel bad. I bet he only wanted directions to get somewhere or find his friend’s house. How stupid of you because now he feels bad from my overreaction. Why do you do things like that? You should think better next time.”

I continued walking, all the while berating myself for being silly, stupid, and unwise. Next time, don’t make someone feel bad. It’s really rude. Mommy has taught you not to be rude and instead care about people’s feelings.

I’m sure you’re already seeing the folly of my conclusions. Of course I did the right thing but my people-pleasing which was already well-honed had just made a wrong conclusion. It’s my fault that man feels bad. I believed I had the power to control someone’s reactions and it was all my fault.

I look back at that incident and see a huge tree that grew from that root of a lie.

Think of it this way. Do I have the power to force someone to think a certain way? Isn’t it their choice? I didn’t force that man to think or react a certain way. And there’s almost a 100% possibility he didn’t feel bad at all. Either he had wrong intentions or he chalked it up to a stupid kid who overreacted.

But I thought I had forced him to think and feel a certain way, and even judge himself badly. That incident among others fertilized the ground of that huge tree and I formed a lie that I needed to be very careful to say the right thing. Otherwise people could feel bad. But isn’t that thinking I have a lot of power? In fact, it might even be concluding I’m a kind of god.

Well, maybe that’s an exaggeration but it is true that only God Almighty can force anyone to think anything or feel a certain way. And usually He allows them to have the choice of their responses and reactions.

What a huge responsibility we put upon ourselves when we take credit for the responses of others or even judge ourselves poorly for the way others feel. But they hold the power to make their own choices and react. We don’t.

Just think of how different people react to the same situation. Something can happen or someone says something that two people hear. One person reacts one way; the other person reacts another way. If it’s true that what we say or do controls another person, then both should respond the same.

How can we apply these ideas?

Stop thinking you or I can force someone to become a Christian or change their spiritual perspective. Psalm 49:7 says, “No man can by any means redeem his brother or give to God a ransom for him.” That person is responsible to take spiritual steps. We don’t have the power through what we say or do to force salvation upon someone. Yes, we should share what God tells us to say, but not take on the burden of feeling responsible.

I hope you can see (and I need to remind myself) that we can have freedom to follow God’s guidance in what we do and say and then trust God to work. What a relief! Their response isn’t up to us. Tweet that!