Procrastination! Why Do I Do It? 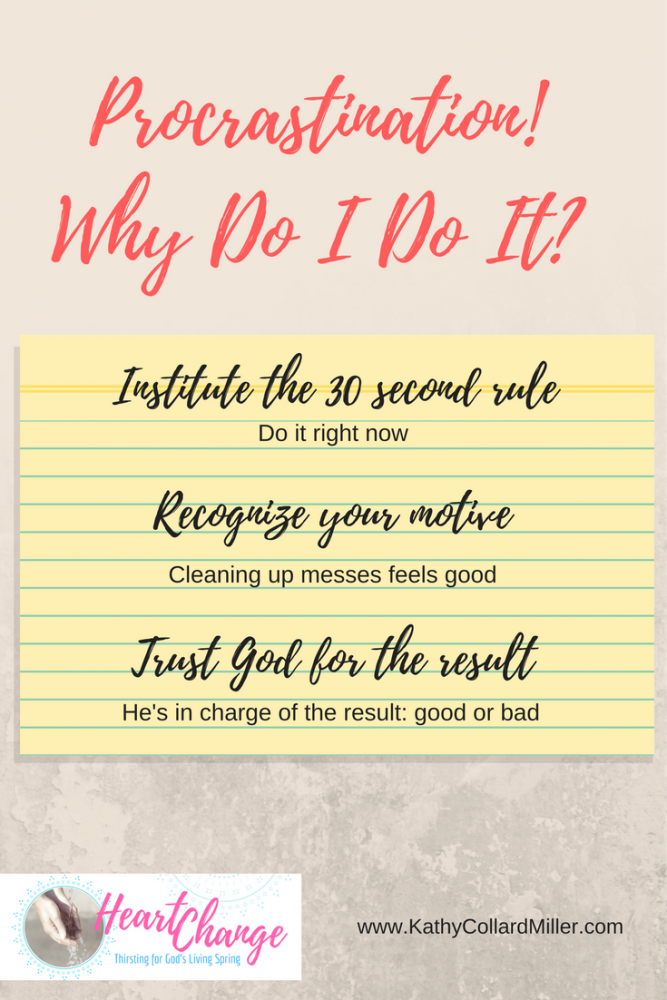 “Why does procrastination haunt me? I want to stop delaying but I keep putting things off.” Just the other day I figuratively shook myself by my lapels and asked, “Kathy, why do you let the dishes stack up? It looks so messy!” Why do I procrastinate?

I had to be honest with myself that I think of myself as dependable but I’m selectively dependable. I let things go I should get done and as a result there is increased clutter, dirt, and messes. I don’t like the results but I don’t seem motivated to do what I should.

As I faced my problem, I began making some commitments led by the Holy Spirit. Here are three ideas He used for me; I hope they are helpful for you if procrastination haunts you.

Even though so much can get done in 30 seconds or one minute, I still put things off. For instance, I pull up my email account on my phone and receive a message that I could easily answer in 30 seconds or a minute. But because I don’t prefer poking that tiny alphabet pad or it’s too noisy to use the microphone, I tell myself I’ll wait to answer when I get to my desk. But then when I get to my desktop computer, so many emails have added up I have a big job—and I delay responding! If I’d been willing to do “little” things rather than waiting, it wouldn’t be overwhelming.

That’s why I’ve been telling myself if something can be done within 30 seconds or a minute, even two minutes, do it right then. As a result, a fast answer to an email or text will save me time later and not feel overwhelming.

I’ve been telling myself if something can be done within 30 seconds or a minute, even two minutes, do it right then. TWEET THAT!

Sometimes we don’t recognize the value of little things but God does. He says in Zechariah 4:10: “Do not despise these small beginnings, for the LORD rejoices to see the work begin” (NLT).

2. Recognize your motive for wanting to put things off

I often wondered why I neglected doing the dishes. After all, instead of putting a dish into the sink or onto the counter, I could have used the same energy and time to stick it into the dishwasher—and it would be done!

Then one day after loading the dishwasher with multiple dishes, I paid attention to my emotions. I recognized the sense of satisfaction in that moment.

It felt good to transform the kitchen from messy to clean. TWEET THAT!

In a sense my anticipation of that accomplishment had been rewarding—and motivating my procrastination. I knew I would feel like I had succeeded at something and so I didn’t complete the small tasks.

To combat procrastination, especially involving clutter, pay attention to your emotions. What emotion does delaying provide? Whether it’s transforming a dirty kitchen or clearing off your desk, look to God for your satisfaction and joy. Anything that replaces Him is an idol. His approval is what we should seek because He wants to tell us, “Well done, good and faithful servant” (Matthew 25:21).

3. I’m afraid of the response I’ll receive for taking action

Whereas we just talked about the satisfaction of success. We can procrastinate because we fear the potential “pain” that’ll result from taking action. TWEET THAT!

Maybe you’ve been putting off responding to that email because you’re convinced whoever receives it will become angry. Or you don’t know exactly what to say to your friend and so you delay—waiting for just the right words to show up in your mind.

But in making those choices of delay we aren’t trusting God. We’re trying to control the situation or another person so that we can protect ourselves from emotional or mental pain. We’re leaning on our own ideas and that’s contrary to Proverbs 3:5-6: “Trust in the Lord with all your heart, and do not lean on your own understanding. In all your ways acknowledge him, and he will make straight your paths” (ESV).

If we recognize our procrastination as not trusting God, then we can recognize we’re saying He can’t be in charge of the results. Since He’s sovereign and therefore in charge of everything, He could literally bring a good result from our poor words. And when our words seem right, He can bring an unexpected good result from a negative response. We can’t control what happens but we can seek Him for wisdom; then take action and trust Him for the resulting “straightened path.”

Which of those three insights could help you to resist procrastination? I know they have been instrumental in seeing God’s work in empowering me to take action and increase my trust in Him.

In fact, just recently, I responded to God’s prompting—finally—about suggesting a book idea to my publisher. I really didn’t think she would like it and I feared the seeming “rejection.” But she quickly wrote back and said, “I like this and I’d like to explore the possibility more.” I don’t know what will happen but for now I know I didn’t procrastinate (much!) and God may have a surprising result.