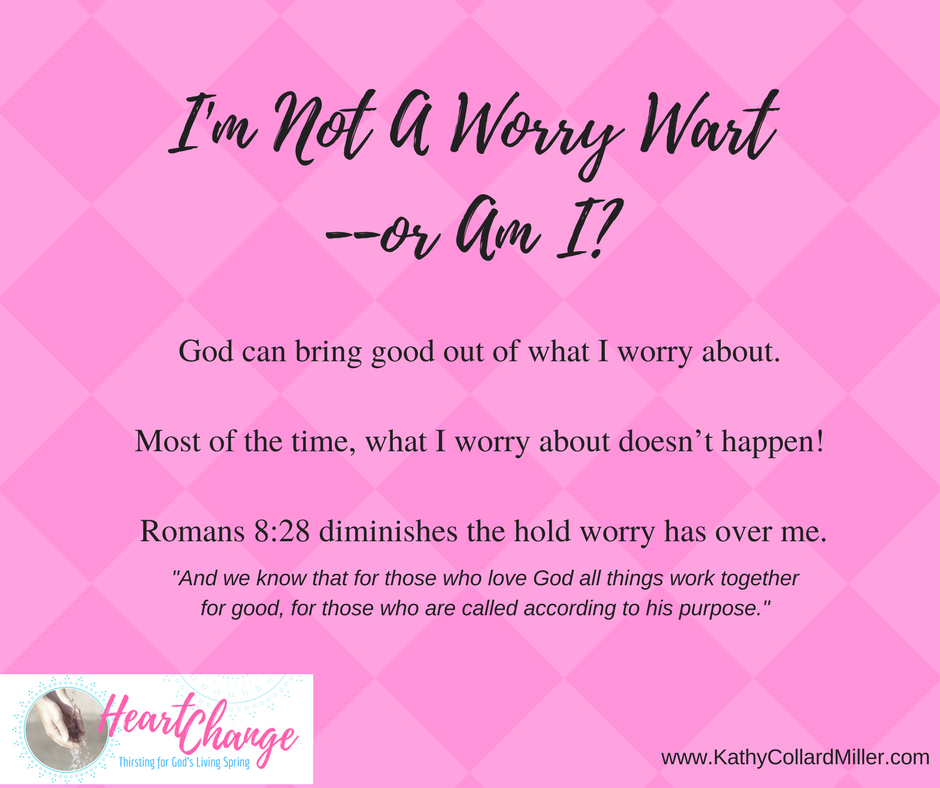 When I was honest with myself, I had to admit, “I’m a worry wart.” I don’t think that term is used so much any more but I was like “him.” Why did I say “him”? Evidently, the phrase “worry wart” was invented by a cartoonist as the name for a comic strip character who caused others to worry. And I’m like him. I cause others to worry by my own worry. At least I think I have that much power. Hmmm. Most likely not.

Now many years later after recognizing my worrying tendencies, I’ve found some solutions to diminish the hold worry has over me..

Although I can’t stake any claim to conquering worry completely, many years ago as a fairly new Christian, I heard a concept at a seminar that began my mental and emotional transformation about worry:

“Think of the worst possible thing that can happen and then think of reasons why it wouldn’t be so bad after all.”

The speaker shared Romans 8:28, “And we know that God causes all things to work together for good to those who love God, to those who are called according to His purpose.” (NASB)

Hmmm. An interesting concept. Obviously scriptural. I mulled it over and then got worried! I don’t think I want to give God the impression He has my permission to do the worst possible thing!
It seemed a risk, but my heart longed to be free from the nagging worries ruling my life.

I was nineteen fast going on twenty years old, yet I felt like worry was my daily portion—like a storm cloud always threatening on the horizon. I had to think about how my friend may have misunderstood what I’d said. I had to be concerned about my grades in college. I had to wonder about my future. Of course, I used those innocuous words (think, be concerned, wonder about) because I worried someone would think I wasn’t a strong Christian if I used the word “worry.” I felt tense, even condemned, because I knew God couldn’t be pleased with me as a worry wart!

It is possible to be worrying in your heart even if you use words like wondering or concerned. TWEET THAT!

Then came the day I attended that seminar and that comment stood out in bold relief. Can I apply it? I decided I would try.

The day after the seminar I returned to my part-time job in the morning and college classes afterwards. There were no extra minutes between traveling from the first to the second. I often fretted about arriving late to class. (Oh! Did you notice another substitute for the word “worry”: fretted.) That morning I left work late because my boss pulled me aside to discuss something. As I drove, my stomach churned. I envisioned walking into the classroom late with all eyes on me and the teacher making some belittling comment.

Then I remembered the principle: “Think of the worst possible thing that can happen and then think of reasons why it wouldn’t be so bad after all.” I rehearsed Romans 8:28. Here’s my chance, I mused. What good thing could happen from being late? I paused to think of something. OK…I’ll be noticed! But that’s the very thing I’m afraid of!

I smiled. But wait! I’ve been trying to share Christ with my fellow students. Maybe I can use being late to tell my new friend about how worried I was and how God gave me peace of mind!

Bingo! With those thoughts, my anxiety level diminished. I couldn’t wait to be late to class! I didn’t need to drive like a maniac! God was going to use it!

Ten minutes later, I walked into class without my typical breathlessness and was shocked to see the teacher hadn’t even arrived. He was late! I took my seat beside my new friend and I told her what happened. We laughed together.

Please share with us in the Comment box below what you find helpful for diminishing worry. Or let’s talk about how the principle I’ve shared here could help us. I look forward to chatting with you.

This is an excerpt from my book Partly Cloudy with Scattered Worries.