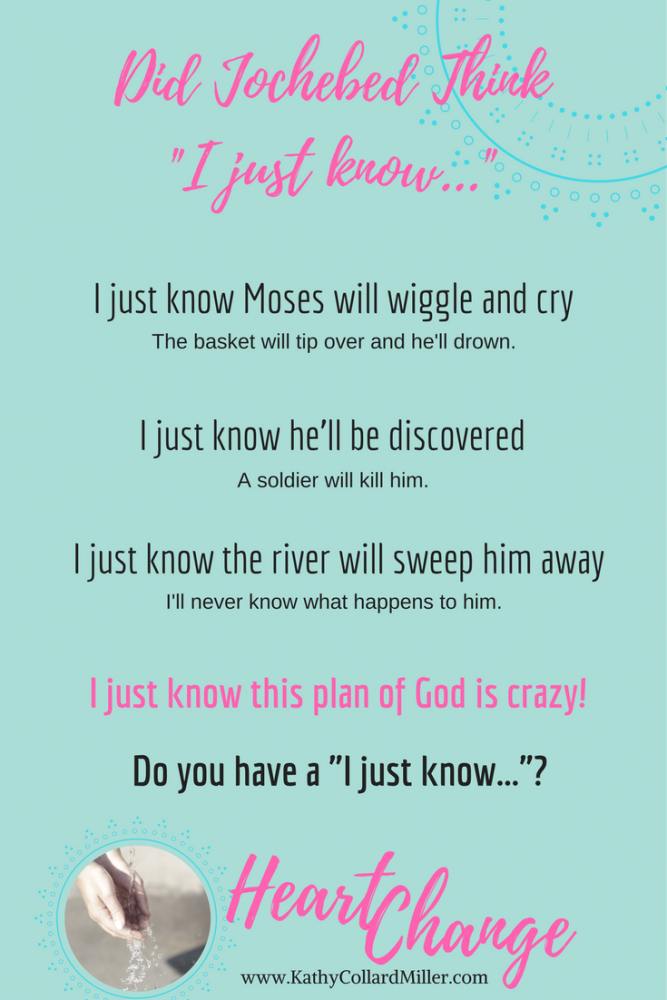 The story of Jochebed in Exodus 2 is a riveting story of coping with worry about the most horrendous thing any mother could ever imagine: the death of her newborn son. Can you imagine? No wonder she might have had thoughts like, “I just know…”

Jochebed had a lot to worry about. She had given birth to a son. Normally a wonderful joy, the opposite occurred. This little boy’s birth was actually a death knell to the family. At that time Pharaoh had ordered all sons born to the Hebrew people be killed. Jochebed must have been on pins and needles caring for the child for three months after his birth. If he cried, she had to shush him, lest someone hear him. When she nursed him and he made gurgling sounds of satisfaction, could she whisper her love without fearing someone would hear her? How about other Hebrew women whose sons had been killed? Did she fear they would report her out of their own jealousy and grief?

She must have looked over her shoulder a thousand times, wondering who was watching her as she took care of Moses and brought him out of his hiding place to nurse him and care for him. And it wasn’t for Moses’ sake alone she feared; in disobeying the Pharaoh, her own life was in danger–along with her family members. So much to worry about.

Edith Deen muses, “How Jochebed managed to save her son from Pharaoh’s edict during the first three months of Moses’ life is not recorded. We can imagine she might have hidden him in a donkey stable or a storage room where she kept clay jars filled with grain, peppercorns, onions, bread, dates, and other foods. But after he became three months old, she knew she could no longer take the risk of hiding him.” (pg 51, All of the Women of the Bible)

If we didn’t know the end of the story, any of us would be biting our fingernails wondering and fretting.

In our own lives, we don’t know the end of the story so we worry. TWEET THAT!

What will happen to Moses? Without her faith in God, Jochebed wouldn’t have had the courage to hide him. Even with her faith in God, she must have been afraid to send him floating on the Nile River with no guarantee for her child’s protection. As she planned to prepare a basket for her little bundle of joy, I can only imagine the fearful thoughts swirling in her mind:

Did Jochebed have such thoughts? Most mothers would have, yet she must have felt God was guiding her to make such a bold move. She didn’t just worry, wonder and fret; she took action as God led.

Thinking “I just know…”? Warning! You could be worrying! Jochebed must have. TWEET THAT!

We know God brought something good out of her obedience: a deliverer for the Israelites and the founding of a great nation. We want to be like Jochebed and we can be!

Although I can’t imagine any of us experiencing such an intense form of surrender, It is possible Jochebed’s feelings of having to let go and trust God could be similar to what you experience. It may not be choosing to send your newborn son down a river in a basket but the feelings of intensity could be the same.

Please share in the comment section below about how you’ve learned to trust God more, or maybe you have a struggle you’d like us to pray about for you for greater trust. We all are in a process of learning to trust God more. I’d love to chat with you here.

This post is adapted from my book, Partly Cloudy with Scattered Worries. 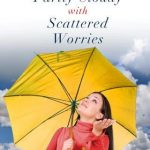