My Husband Should Read My Mind 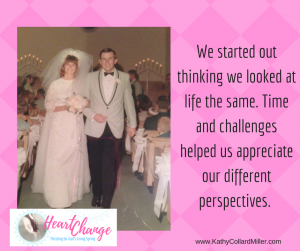 I didn’t realize I went into marriage believing Larry should read my mind. I just thought it should be obvious what I was thinking. After all, if I did something, I obviously was communicating something clear. So I filtered what my new husband did through my thinking: “If I had done that it would mean, so when Larry does that, it means the same thing.”

But I learned what is obvious to me wasn’t quite as obvious to Larry, nor did he think the same way as me.

Two years into our marriage, Larry and I shopped for a new dining room table. He expressed a desire for a “distressed wood” table, one where tiny pieces were gouged out to make it look old. That was fine with me. In fact, I pictured our children someday sitting at the table doing their homework and I shared my warm image with Larry.

Larry responded, “Kathy, our children can’t use this kind of table.”

I stood stunned at his words. How dare he think his precious table was more important than our children. I quickly thought of several times Larry had made similar choices indicating his wrong perspectives. “Well,” I concluded, “he can just pick out any old table he wants and I’ll make sure our children stay away from it.” I was furious. “Obviously, his priorities are totally wrong. See? I shouldn’t have married him.”

Larry’s perspective: I glanced over at Kathy as I started to point to an oak table with a distressed top, then paused. She had a look on her face I couldn’t decipher, but it wasn’t happy. “Kathy, here’s the table I … What’s wrong?”

“Oh, nothing,” I said as I gave him a contemptuous look and then turned my head away. “Go ahead and get any table you want. I don’t really care.” My voice dripped venom.

Larry’s perspective: “Honey, what’s wrong?” When Kathy didn’t answer, I shrugged my shoulders. “Well, if she won’t share with me, she must not want me to know. I’ll go ahead and buy this table.”

Many years later (seven seems to stick in my mind, but I’m embarrassed to think it’s true), I again reflected on that incident as I had many times before. It had become a well-worn illustration to me of Larry’s insensitivty to my needs and our children’s needs.

Thinking through all this, a foreign thought unexpectedly surfaced in my mind. Could Larry have meant our children couldn’t use the table because the pitted surface of the wood would hinder their ability to write on their homework papers?

Larry’s perspective: Kathy was correct in realizing she had misinterpreted my comment. I actually was concerned about the children being able to work on their homework. If only she had asked, I would have gladly explained.

I learned an important lesson that sometimes I have to concentrate on over and over again. Larry can’t read my mind. I’ve mistakenly reasoned, “He loves me, therefore, he should know what is important to me.” But that is not true. We must learn to communicate clearly and even say, “I’m thinking you mean _____. Is that what you mean?”

Interestingly, most men with their logical thinking don’t tend to think their wives read their minds. That’s one of many general differences between men and women. Here are several others.

These are generalities about men and women. Of course not every observation is going to apply to every person or every marriage, but these are tendencies that need to be taken into account as we relate to our spouses. As you read, try to understand your mate with the goal of not taking everything personally or as a critique of you as a spouse.

Keys to understanding as we consider these differences:

What have you found valuable and important for understanding your mate’s different ways of thinking or reacting? Maybe you have a story of how there was misunderstanding, yet through working together, you appreciated each other more. I’d love to hear your thoughts in the comment section below. I hope you’ll get the conversation started.