The Samaritan Woman: Three Strikes Against Her

I’m so excited to announce the winner of the drawing for Pam Farrel’s book “Discovering HOPE in the Psalms.”

The winner is… Linda Weber! 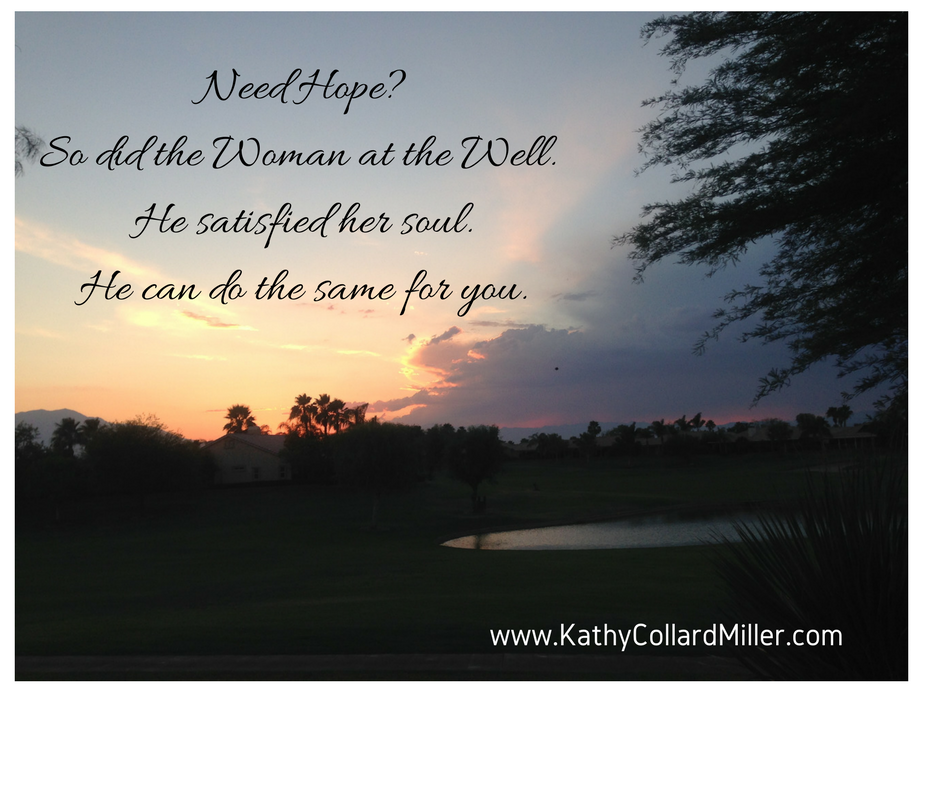 Congratulations, Linda! I’ll send your contact information to Pam. I know you’re going to love Pam’s book. And thank you to everyone who submitted their name. Be sure to purchase Pam’s book.

Now, back to our regularly scheduled posting. LOL. And it’s about the Samaritan Woman. We may think we can’t learn anything more about the Woman at the Well but let’s try. Read John 4:1-54

Have you ever felt like you already have three strikes against you? That’s the Samaritan Woman–the Woman at the Well. Tweet that!!!!

Think of a normal day for this woman. Did she feel hopeless? Helpless? Caught and trapped by her circumstances? Unloved? Unhappy? Discontent? She might have little glimpses of happiness but overall, she was just existing. She was looking for happiness and fulfillment in all the wrong places—through sad and disappointing relationships. Men who mistreated her. The daily scorn of her neighbors and townspeople. She was thirsty and maybe didn’t even know it. She most likely had a low grade awareness of her misery but she couldn’t quite put her finger on it. After all, why even think about it? Nothing was going to change. It never had.

Verse 4 tells us how totally opposite God viewed this woman: she was important enough that Jesus “had to pass through Samaria.” Actually, He didn’t have to. No other Jew did. They avoided that area at all costs—even the cost of taking the longer route around Samaria because the Jews hated the Samaritans and avoided them like the plague. Plus, this woman had three strikes against her in this society and culture: she was a woman, a Samaritan, and a sinner. Nothing could have made the situation more unlikely for the Messiah to stop by.

At this time, Jesus was weary, but not too weary to keep Him for God’s appointed task: to reach out to one woman. TWEET THAT!

That was His highest priority. One person is important enough for Jesus. Not the combined value of the group, but one sinful, unhappy, thirsty woman. Jesus as a human, yet with a divine soul, made her important enough to put aside His own needs. He longed for her to recognize her thirst, planned for her to experience her thirst, and invited her to allow Him to meet her thirst. For her and us, that is His priority.

I feel sorry for those from the village who were just as needy emotionally but weren’t there. The townspeople most likely compared themselves to this woman and thought they were better than her. They wouldn’t need an encounter with Jesus—they were doing just fine. Her neediness put her in the right place at the right time. When we recognize our own neediness, it puts us in a thirsty place—just right to receive God’s intervention.

The woman comes to get water at the end of the day when it’s the hottest—6pm. Most women went at the beginning of the day when it was cooler and then as they gathered together at the well, turned it into a gossip fest. Certainly, this needy woman was often the topic of their conversation. After all, she just couldn’t get her life together and they had.

This woman wanted to avoid that scorn and rejection and came at the end of the hot, dusty day when no one was there. But this time—how many late afternoons had she already been there?—Jesus was there. And He asks her for a drink. At this point, that request seems selfish. What self-centeredness in the Son of God! Where’s the selflessness of God Himself?

Yet, isn’t that how He works in our lives? What God asks often seems selfish on His part. How He leads doesn’t seem like it’s for our benefit. It’s all about Him! But when it’s all about Him, we receive the blessing too. He’s about to turn His seemingly selfish, simple request into a life-changing and eternity-changing experience for this lonely and disappointed woman.

Any of us can feel like the Woman at the Well at different times of our lives. But just like Jesus reached out to a lost and lonely woman, He reaches out to you. You are important enough for Him to make the effort to love you.

How does it make you feel to recognize the effort Jesus made to reach one woman who had no hope? Please share in the comment section and if you want, you can share a lonely or “lost” time in your own life. I’m confident your sharing would encourage us all.