In the Roman culture when Paul wrote his Epistle to the Ephesians, a Roman father could disinherit a son born into the family, but not an adopted child. 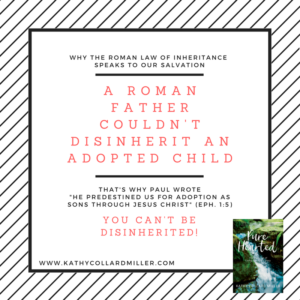 That fact has everything to do with Paul assuring his readers they were secure in their salvation. Here’s how.

“he predestined us for adoption as sons through Jesus Christ, according to the purpose of his will.”

We take for granted God prompted Paul to refer to adoption, for he could have just said, “he predestined us to be members of the family of God.” Instead, the fact Paul specifically referred to adoption was hugely important. TWEET THAT!

As a Roman citizen, Paul knew the Roman law and culture. A Roman father had no choice as to what he received when a baby was born naturally into the family. If the child grew up and disgraced the family, the father could justify disinheriting him by saying, “I didn’t know he had all these flaws, otherwise I wouldn’t have chosen him.”

But an adopted child was chosen specifically with full knowledge of his strengths, weaknesses, appearance, and anything else a family considered important. Therefore, a father could not justify disinheriting him. A father could never say, “I didn’t know what I was getting.”

Paul’s wording didn’t just say we are sons (or daughters). He included the fact we are adopted. His readers knew the significance of not only becoming a son but an adopted son—a position which could not be taken away regardless of performance or flaws.

I hope this speaks to you as much as it speaks to me. God wants us to know we cannot be disinherited—we cannot lose our salvation! He chose us fully knowing we would not be perfect.

But he also wants us to desire to please Him out of gratitude for the great salvation He has given us. As we live in that assurance, we’ll give glory to God.

How does that speak to you? Is it meaningful? I’d love for you to share with us if it is, or if it’s confusing. We can learn from each other.

(excerpted from my book, Pure-Hearted: The Blessings of Living Out God’s Glory) 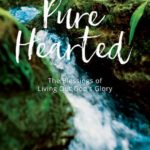