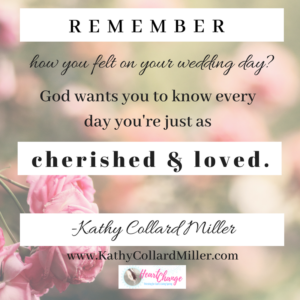 Are you offended I called you a 1,000 cow woman? Or maybe you’re wondering if you’re a Jersey or a Hereford cow?

Actually, calling you a 1,000 cow woman is a wonderful idea. You’ll know why after you read this story from A Marriage Made in Heaven by Glenn Greewood and Latayne C. Scott.

The story is told of a primitive culture where brides were purchased from their parents using cattle as an exchange medium. An average woman might merit the bride-price of two cattle; an exceptional woman might bring three; while a less desirable woman’s family would receive one cow.

Into this society, the story goes, a rich and attractive suitor came, looking for a wife. All the families paraded their eligible daughters before him. Everyone was surprised when he announced his intention to negotiate with the family of a young woman who was unattractive and clumsy.

Perhaps it’s a bargain he’s after, the townspeople speculated, wondering if perhaps he would offer chickens instead of cows. To everyone’s amazement, he offered the girl’s family six cows for their daughter and quickly whisked her away for a long honeymoon.

When they returned, months later, no one recognized the new bride. Gone were the slumping shoulders and dull eyes. It was as if she were a new person, radiating beauty and confidence.

No, her husband had not bought her beauty treatments or a facelift. He had begun their relationship by showing her in a tangible way that he thought she was important and valuable. She had begun to act the part, to see herself as he saw her, and the rest of her life she was viewed with awe by all her friends–a six-cow woman.

Isn’t that a great story? I love it! It’s describing the “mohar” in the Jewish culture. Genesis 34:12 says, “Ask me ever so much bridal payment and gift, and I will give according as you say to me; but give me the girl in marriage.”

But here’s the best part. You and I are not just a six-cow woman. We are a 1,000 cow woman because of the price God paid for our salvation through Jesus’ death and resurrection. (TWEET THAT!)

Jesus is the most valuable gift God could give. It would have been like that groom giving his future bride, his chosen one, a whole flock, oh, sorry, wrong term, (I’m not a rancher), a whole herd of millions of cows. Really, there’s no way to describe the value of God’s gift.

That’s what God thinks of you! And the more we truly believe and trust in that, the more our life will reveal God’s glory.

How do you feel now about being called a 1,000 cow woman? I hope it’s a compliment and encouragement. I’d love to hear in the comment section how that affects you. Or maybe you’d like to share what blocks you from receiving that good news? Or give a word of encouragement to my readers how you have learned to believe that truth more?