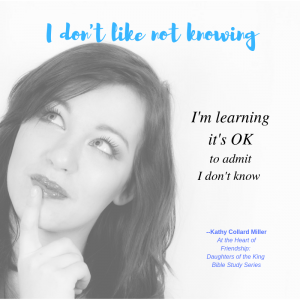 What’s even sillier, is that I will give an opinion even though I’m not sure I’m right—so that I can avoid saying, “I don’t know.” That’s pretty bad. My. My.

So it was with interest that I studied Zechariah 4:5. The prophet Zechariah has been shown a vision of a lampstand and several other things. He asks what the items mean and here’s verse 5: “So the angel who was speaking with me [Zechariah] answered and said to me, ‘Do you not know what these are?’ And I said, ‘No, my lord.'”

If I had been Zechariah, I wouldn’t have asked what the things are because that would have shown my…there’s that word again… stupidity.

And then when the angel asked, “Do you not know what these are?” I would have bluffed my way into some sort of answer (said as if I’m Rocky Balboa), “Well, sure, I know what it is. Whatcha think I’m stupid, or somepin’?”

So I’m admiring Zechariah. He had the humility to admit he didn’t know and he was willing to being instructed.

I need to remember him as my inspiration for admitting when I don’t know. It’s OK to even appear to be stupid because it doesn’t matter what other people think of me. What matters is God’s view of me and He already knows when I don’t know. And He would much rather I admit my lack of knowledge and ask to be informed.

In the Jamieson-Fausset-Brown Bible Commentary, it says that the angel’s inquiry of “Do you not know…?” is not a reproof of Zechariah’s ignorance but an invitation to reflect on the mystery of what he’s seeing. And when Zechariah admits his ignorance, it’s “as a little child [who] casts himself for instruction at the feet of the Lord.”

I should remember that even if a person is giving me instruction, I may actually be “at the feet of the Lord” because He has designed for this person to give me information.

How about you? Do you find it hard to say, “I don’t know”? If so, let’s both envision ourselves “at the feet of the Lord” when He designs for us to be given instruction. One of these days, we’ll never need fear we’re seen as stupid. We’ll be in heaven!