Don’t Worry; Martha Will Do It

I wonder if Martha, the sister of Mary, was the dependability queen in her town, Bethany. I can just imagine at the Women of the Temple Committee meeting for the upcoming women’s luncheon event, the chairperson asking, “Now who can we get to cater the lunch?”

Everyone looks around and another woman asks, “Where’s Martha?”

Mary speaks up, “Oh, she’s at the meeting for the Temple Benevolence committee.”

A third woman raises her hand. After being called on by the chairperson, Lydia says, “Ask Martha. She’ll do it.”

Could Martha have worn an invisible S on her tunic? No, not for Superman, although many most likely called her Superwoman. But S for steadfast and its twin sister, dependability. Why else would Martha have been so crazy busy when Jesus came visiting? Remember the story?

Now as they went on their way, Jesus entered a village. And a woman named Martha welcomed him into her house. And she had a sister called Mary, who sat at the Lord’s feet and listened to his teaching. But Martha was distracted with much serving. And she went up to him and said, “Lord, do you not care that my sister has left me to serve alone? Tell her then to help me.” But the Lord answered her, “Martha, Martha, you are anxious and troubled about many things, but one thing is necessary. Mary has chosen the good portion, which will not be taken away from her.” Luke 10:38-42

What motivated Martha? Of course we’ll never know conclusively her heart’s motive. But as women, so many of us are like her because we have chosen the same technique to gain approval and applause: busyness and productivity. We know Martha didn’t have to do everything she did because Mary, who was equally considered the hostess, didn’t. I have no doubt Mary did what she was supposed to do and then chose to abide at Jesus’s feet. If Martha is like me, she thought of “one more thing,” “one more dish,” “one more decorating touch,” “one more …” Did she think, “Just wait until Jesus sees this. He’ll feel so important and valued.” I would have.

But Jesus loves Martha’s soul well. He doesn’t want her to carry the heavy yoke she puts upon her own shoulders and the muddy cistern she is gulping from. He doesn’t need anything to make him feel important or valuable. He only seeks his Father’s approval and applause.

In his concern for her he woos her by pointing out the result of her sin: anxiety, anger, critical spirit, feeling abandoned, even blaming Jesus for not making Mary do what Martha thought she should do. She accused Jesus of not caring for her. Most importantly, her motive was to provide rather than abide. Jesus was saying, “I love you too much. Please look at what you’re doing and why you’re doing it. Come and abide.”

He says the same things to us. How does knowing that speak to you? 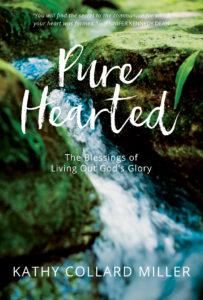 This is an excerpt from my book: Pure-Hearted: The Blessings of Living Out God’s Glory

Check it out at: http://amzn.to/2jzYdWi