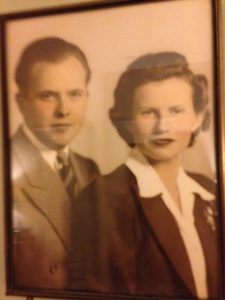 Larry’s dad had died ten years earlier. For five years before she died, she suffered from Lewy Body Dementia (LBDA.org) which conquered her mind and took her into a world of paranoia, delusions and hallucinations. Over those five years, 2 1/2 that she lived with us, she became increasingly angry and confused, accusing us of trying to kill her and stealing her money. At times a sweet lady peeked through but within seconds she would return to her anger and accusations. She ended up not knowing who we were.

Because of the disease’s influence on her mind and her reactions, to my un-credit, I steeled my heart against her, forgetting who she used to be and what she used to be like. So I thought I would reflect on her past to remember that lost lady.

When I first met her, of course, she was the mother of Larry, who I was dating. I don’t remember first going to Larry’s house to meet his parents, but they were very nice, along with his grandma who lived with them. My first specific memory is the day I received Christ as my Savior. I walked out the door of the church crying in gratitude, and Audrey was there. Larry explained what had happened, and she said, “Praise the Lord, I’ve been praying for you.” That touched me and might have been the first time I heard anyone say “I prayed for you.”

After Larry and I got married at 20 years old, I remember a mother-in-law who was steady and calm. I’m sure in my immaturity, I gave her challenges and concerns, but she never expressed them or seemed upset. Only one time did she specifically deeply hurt me, and to her credit, I knew her for over four decades.

She was determined to not be an invasive mother-in-law. She didn’t seem to reach out to us yet was readily open to anything we might suggest, like visiting them or suggesting they visit us. When we bought our first house an hour away, long distance charges prevented them from calling. Their “sparse mentality” because of growing up in the depression prevented them from making “long distance” phone calls except in an emergency.

I actually wanted them to reach out to us more, yet I have to acknowledge I didn’t reach out to them more or express my desires. Looking back, I can see I liked the separation and even enjoyed my resentment. Since I blamed them, I didn’t take responsibility for my part of the problem.

As I reflect on my life with Audrey as my mother-in-law, I can be grateful for a woman who modeled Christ and was more gracious than I gave her credit. I believe she faithfully prayed for me and our family even though she didn’t actively talk about it or ask for prayer requests.

As I reflect on Audrey, I’m encouraged to let others know how I’m praying for them.

Is there someone from your past who you would like to share a “lesson about life” you learned from him or her? Let’s all learn together.