Gideon Has An “Eye” Problem

We all know the story of Gideon but Larry and I are hoping this devotional article from our new book God’s Intriguing Questions: 40 Old Testament Devotions Revealing God’s Nature will give you new insights.

Gideon has an “eye” problem but God counters with His own “eye” perspective. 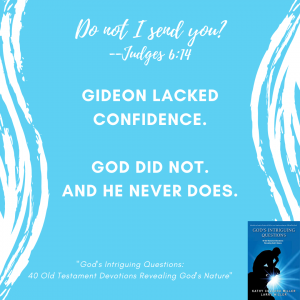 Gideon lacks confidence, feels inferior, argues with God, and doesn’t recognize God when he shows up. Just like us.

Many versions, like the ESV, phrase Judges 6:14 as: “And the Lord turned to him [Gideon] and said, ‘Go in this might of yours and save Israel from the hand of Midian; do not I send you?’”

But other versions translate “the Lord turned to him” as “looked at him” with the idea of calm, confident, and gracious regard. One Hebrew synonym is “respect.” Like Moses, Gideon resists God’s call by pointing out his own inadequacies.

God in his patient way, gently refutes Gideon’s lies about himself with facts about his own nature: his presence which is also called his omnipresence.

When the Angel of the Lord first speaks, Gideon talks to him as if he doesn’t realize the Angel is God himself. He replies, “Please, my lord, if the Lord is with us, why then has all this happened?” (6:13). His first use of the word “lord” does not refer to God. Then he uses the phrase “the Lord” as if God isn’t already in his presence. In a sense he says what we say, “Where is God when I need him? He isn’t here at all.”

But the Lord doesn’t walk away from Gideon thinking, “If you’re not going to acknowledge me as being right here, I’m done with you.” No, Jesus (in a pre-incarnation form) persists and turns toward (or looks upon) Gideon to reveal himself as the Angel of the Lord—God himself. Gideon finally acknowledges the Lord God Almighty himself is present with him.

“Please, Lord, how can I save Israel? Behold, my clan is the weakest in Manasseh, and I am the least in my father’s house.” And the Lord said to him, “But I will be with you, and you shall strike the Midianites as one man.” (Judges 6:15-16)

Gideon expresses the real problem: his disbelief about God’s empowerment and presence. The problem isn’t with his own inadequacy or lack of resources. Yes, those are obstacles. But the real problem is Gideon doesn’t believe who God says he is.

Gideon has an “eye” problem. Actually, an “I” problem. That verse contains a verbal sparring match of “I”s. Gideon says, “How can I save Israel? I’m weak and least.” Then God stresses his presence by emphasizing the correct “I.” “But I will be with you …”

We all can be like Gideon. We focus on ourselves and act as if God isn’t who he says he is. We say God is powerful, but we worry. We say God is loving, but we believe he doesn’t care about our loved ones, otherwise their lives would be different. We say God is peace, but we struggle with anxiety. Our responses reveal our true beliefs and our own inadequacies seem larger than his power.

As we feel weak and less than, which “I” will we depend upon? Ourselves or the great, powerful, present “I am” who says, “I am with you.” TWEET THAT!

God questions Gideon and questions us: “Will you believe who I am? I am here with you. Act as if I am.”

Loving Heavenly Father, I praise you for your presence which is not restricted by the universe and beyond.

Thank you because your presence is both a help and a comfort. 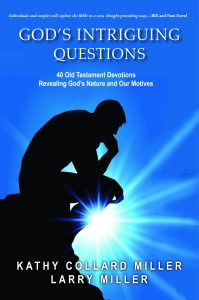