In Honor of J.I. Packer

In honor of J.I. Packer: my favorite story and quote from him. 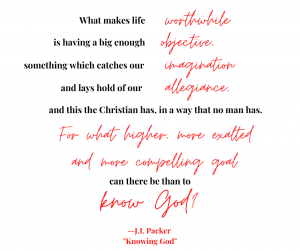 J.I. Packer had a profound impact upon my life through his books. In my writing and speaking, I use one of his quotes most often. His words describe my passion for knowing God.

In my book, Pure-Hearted: The Blessings of Living Out God’s Glory, I refer to this story from Professor Packer’s book, Knowing God.

After reading of his experience, you won’t be surprised to hear he wrote the words I quote most often:

“What makes life worthwhile is having a big enough objective, something which catches our imagination and lays hold of our allegiance; and this the Christian has, in a way that no other man has. For what higher, more exalted, and more compelling goal can there be than to know God?”–J.I. Packer, Knowing God

Listen to J. I. Packer’s story:

“When Jesus Christ laid hold of me, I was already well on my way to becoming a cynic …

“Cynics are people who have grown skeptical about the goodness of life, and who look down on claims to sincerity, morality, and value.  …

“I was reared in a stable home and did well at school, but, being an introvert, I was always shy and awkward in company. Also I was barred from sports and team games by reason of a hole in my head—literally, just over the brain—that I had acquired in a road accident at age 7. For years I had to cover the hole, where there was no bone, by wearing an aluminum plate, secured to my head by elastic. …

“… So I developed a self-protective sarcasm, settled for low expectations from life, and grew bitter. Pride led me to stand up for Christian truth in school debates, but with no interest in God or a willingness to submit to him.”

Then Packer began studying Ecclesiastes. From chapters one through six, he identified Solomon’s phrase, “under the sun,” as meaning “the natural order, wisdom in itself, uninhabited self-indulgence, sheer hard work, money-making, public service, the judicial system, and pretentious religiosity.” He had to agree with Solomon’s point: living “under the sun” doesn’t bring fulfillment because it is void of God’s perspective.

Then one verse changed his cynicism: He has made everything beautiful in its time. Also, he has put eternity into man’s heart, yet so that he cannot find out what God has done from the beginning to the end (3:11).

J.I. Packer defines “eternity” as “a desire to know, as God knows, how everything fits in with everything else to produce lasting value, glory, and satisfaction.” (TWEET THAT!)

Packer points to Ecclesiastes 12:13: The end of the matter; all has been heard. Fear God and keep his commandments, for this is the whole duty of man.

Professor Packer concluded, “Being too proud to enjoy the enjoyable is a very ugly shortcoming, and one that calls for immediate correction. Let it be acknowledged that, as I had to learn long ago, discovering how under God ordinary things can bring joy is the cure for cynicism.”

Years after Professor Packer turned from his cynicism, he wrote, “What makes life worthwhile is having a big enough objective, something which catches our imagination and lays hold of our allegiance; and this the Christian has, in a way that no other man has. For what higher, more exalted, and more compelling goal can there be than to know God?”

What do you find interesting, intriguing, or motivational in this story or quote?

Any cookies that may not be particularly necessary for the website to function and is used specifically to collect user personal data via analytics, ads, other embedded contents are termed as non-necessary cookies. It is mandatory to procure user consent prior to running these cookies on your website.