Free Yourself of Being Offended

Free Yourself of Being Offended 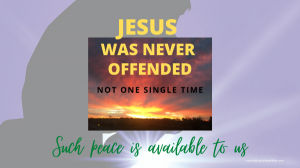 Being offended occurs a lot in our world. And it seems justified. Someone stops attending church because of the sin of Christians. A pastor has an affair. A Christian businessperson swindles people. A Christian who … the examples are endless. The person leaving the church declares, “I don’t want any part of a group filled with hypocrites.” They are offended because their focus is on people, not Jesus.

Jesus was never offended. Not one single time. TWEET THAT!

Jesus, while on earth, dealt with the same reactions in others and was never offended. Not one single time. In John 6:51-66, Jesus refers to feeding on His flesh and drinking His blood. And life coming only through Him. These concepts are strange to everyone hearing Him and seem contrary to the laws of the Torah.

Though Jesus is completely sinless, His words to the large group of followers has offended them, and they want to leave the “church.”

Yes, they misunderstand what Jesus is talking about (his body, flesh, and blood), but being offended is more than lacking mental understanding.

Taking offense is a defensive protection surrounding the self and the heart—how we feel and regard ourselves and how we want others to think of us. TWEET THAT!!!!

Those in the crowd surrounding Jesus may have been thinking:

Of course, these are guesses, but most of the time when we’re offended, we feel there’s a judgment about us. We are “hurt,” which is another way of saying we are insulted, put down. Someone has indicated we’re less than we want to appear. For these “followers,” being offended reveals they are not following Jesus out of pure motives of love and respect. They want life but on their own terms. What He can give them–not Him as the gift.

As many in the crowd leave, they grumble all the way. Yet Jesus is immovable. Jesus’s immovability about his Father’s mission models strength and commitment for all followers and especially His apostles.

Don’t be offended because others are offended.

Jesus is saying to us: “My followers, many will be offended and turn away. Stay immovable in the mission I’ve given you.” Remember:

As the apostles later begin their ministries, Jesus’s example of not being offended will strengthen them.