How to Resist A Donut

Yesterday morning at 6 a.m., as I walked home from our neighborhood work-out room, I felt drained by the unusual humidity along with the 90-degree 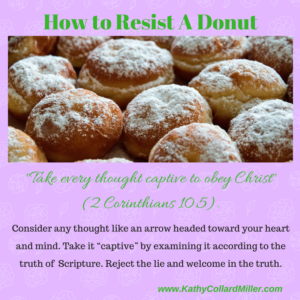 temperature. Tomorrow morning, I’ll have to drive the car. And then the most delicious thought entered my mind. After I finish, I’ll go get a donut.

Oh! What motivation to drive the car to the gym. I felt delightfully sneaky. I could already taste my favorite donut—the sugar cinnamon spice. What does it matter I’m trying to eat more healthfully? I deserve a donut!

Then my spiritual eyes were opened and 2 Corinthians 10:5 came to mind: We destroy arguments and every lofty opinion raised against the knowledge of God, and take every thought captive to obey Christ.

I saw Satan’s ploy to destroy my self-control by using a tactic of mine I developed in childhood. TWEET THAT!

I often felt like the possibilities offered me were promises. Most often they were not fulfilled. I shared a room with my sister and always wanted my own room. At one point, most likely when I was a pre-teen, my mother mentioned, “Daddy and I are thinking of making the garage into your own bedroom.” What great news. I felt important and valued.

Emotionally, I waited on the edge of my seat for the next mention of the coming transformation. But my parents never brought up the idea again. In my insecurity, I didn’t ask about it because I feared hearing, “We aren’t going to do it.” Such an answer would feel like rejection and they would be affirming the truth I didn’t deserve anything special.

My hope died a slow painful death, and I’m sure my parents thought I’d forgotten. I’m not even important enough for them to tell me they changed their mind.

Somehow in my complicated way of thinking, I began to hate being disappointed, even by myself. My belief was “a broken promise equals rejection.” My warped “self-control” could make sure I kept any promise to myself of a highly desired thing—like a donut—even if I couldn’t control other people.

All this was involved yesterday morning when I promised myself a donut. But I was willing to allow God to empower me to take every thought captive to obey Christ (2 Corinthians 10:5).

Kathy, if you continue to promise yourself this donut, by tomorrow morning, it’ll be even harder to resist. Praise God, I saw the lie and I refused to be caught in Satan’s web.

As I studied the truth of 2 Corinthians 10:5, I began to envision any thought as an arrow headed toward my heart and mind. I could take each thought “captive” and examine it whether it aligns with Scripture and is the truth. Then reject the lie and receive the truth.

By captivating our thoughts and evaluating whether it’s a lie or truth, plus asking for the Spirit’s power, we choose obedience resulting in God’s power being seen by others—to his glory.

(This is adapted from my book Pure-Hearted: The Blessings of Living Out God’s Glory.) 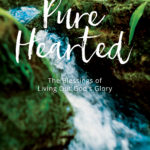