I Loved Being the Favored “Teacher’s Pet” in Third Grade

When I was in third grade, I was Mrs. Leighton’s “teacher’s pet.” 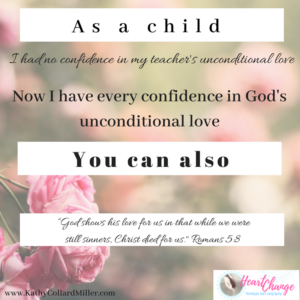 Everyone knew, especially my fellow students, that Mrs. Leighton favored me. The feeling of her favor was like drinking living water for my child’s thirsty soul. Mrs. Leighton, for some reason, had chosen me as important and worthy of her special approval. Looking back now, I know I assumed it was because I was such a smart, obedient student. In fact, for every report card in all my elementary years, every teacher wrote, “Kathy is a very dependable and conscientious student.” I loved that affirmation.

On one particular day, I said something hurtful to someone in class that several students heard. I don’t remember what I said, but it was so bad that one of the students called Mrs. Leighton over and told her what I’d said. Mrs. Leighton looked at me with concern and asked, “Kathy, did you say that?”

And I chose to protect what seemed like living water. I lied. “No, Mrs. Leighton, I didn’t say that.”

Mrs. Leighton smiled her approval—she even looked triumphant—and turned away. In that moment I knew I was a liar and I felt ashamed. Looking back now, I made an unconscious vow: “No one must ever know that I am a liar.” I don’t remember thinking those words, but the result I now see is undeniable. I became dependable.

I’ve written and spoken about that story many times, including in my book, Pure-Hearted: The Blessings of Living Out God’s Glory. But only a short time ago, God revealed another layer about this story that I’ve never seen before and that insight added to the healing of my heart.

As that third grader I didn’t understand grace.

That’s not seemingly earth-shaking except that believing my good performance earned the status as “teacher’s pet” prevented me from admitting my wrongdoing and asking for forgiveness. Looking back now, I believe Mrs. Leighton would have responded, “Kathy, thank you for being honest. Please ask your friend for forgiveness and all is forgiven and forgotten.” But because I believed being a good student was the only reason Mrs. Leighton cared about me, I never thought of it.

I feel as I’m writing this that the importance to me can’t be described. For years before and after that, I believed I needed to be good enough to earn God’s love. Mrs. Leighton symbolized that. No one loved me just for myself. Only what I could do–and do it right and well.

Mrs. Leighton was like my false image of God. God couldn’t love me unless I was perfect so neither could Mrs. Leighton.

What a burden. What a cross to carry. And yet Jesus had already carried the cross and died on it for me. That became truth to me at age 18 when I heard the Gospel clearly for the first time and did what I should have said in third grade: “I’ve sinned, will you forgive me?”

Of course I don’t know what Mrs. Leighton would have said. But I know for sure what Jesus said when I first asked him for salvation years ago and now each time I confess a sin. He reminds me of the truth of Romans 5:7-9,

“For one will scarcely die for a righteous person—though perhaps for a good person one would dare even to die—but God shows his love for us in that while we were still sinners, Christ died for us. Since, therefore, we have now been justified by his blood, much more shall we be saved by him from the wrath of God.” (ESV)

In third grade I had no confidence in Mrs. Leighton’s unconditional love of me. But now, I have every confidence God loves me unconditionally in spite of not deserving it. It’s my only hope.

What gives you confidence in God’s unconditional love? I’d love to hear and so would my readers so that we all could be encouraged.