I’m sure we all have and it seems like a really good thing to focus on avoiding the mistakes of some and emulating the good points of others. Even the Apostle Paul said, “Brethren, join in following my example, and observe those who walk according to the pattern you have in us.” (Philippians 3:17 NASB). 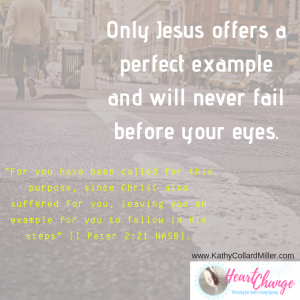 But it was also pointed out to me some time ago that if we only measure ourselves by other people, they become our “plumb line.” And unfortunately, other people, even exemplary Christians, are still an imperfect plumb line. Plus, when we start focusing on other people, we can begin to feel either superior or inferior depending upon whether we think they’re better than us or worse than us.

And as soon as we use words like “never,” or “always,” we’ve made a vow that leaves out God. We’ve become the judge and jury of what is good and right or bad and wrong. When the person we’re emulating falls apart, what happens to our “always be like him”? And when the person who we swore we’d never be like, turns a corner back to the Lord, what happens to that vow? It gets kinda confusing, don’t you think?

The Apostle Peter has the best advice: “For you have been called for this purpose, since Christ also suffered for you, leaving you an example for you to follow in His steps” (I Peter 2:21 NASB).

Peter learned that lesson himself. As a practicing Jew, he had vowed never to eat unclean food. Then while praying, Peter fell into a trance and saw a great sheet coming down with all kinds of unclean animals in it. Within seconds, he was shocked to hear Jesus tell him to kill and eat the animals. Peter said (can’t you just hear the vehemence in his voice?), “By no means, Lord, for I have never eaten anything unholy and unclean.”(Act 10:14).

You can hear the subtle vow of, “I’ve sworn I’ll never do such a thing because then I’ll be unholy.” In a sense, through his vow, he was depending upon his behavior to make him righteous before God. Of course, that vow had begun before He knew Jesus as His Savior through grace. Now he knows that only Jesus is The Way, yet, the old vow had never been eliminated. The vow would prevent him from seeing God’s next opportunity to minister when Cornelius arrived (read Acts 10). Thankfully, Peter turned from his vow and as a result, his ministry to Gentiles began.

Peter had his eyes on all the legions of Jews who had kept the Law and thought they’d gained righteousness through it. It took three commands from Jesus (vs 16), before Peter heard the truth: “Don’t focus on others; keep your eyes on me and what I say is clean or unclean.”

The next time you start to say things like, “I’ll never be like her,” or “I’ll always be like him,” stop and ponder who should really be your model and “plumb line.” Only Jesus offers a perfect example and will never fail before your eyes.