My Brother’s Most Important Words to Me

After a five year journey of fighting cancer, the Lord took him home and we all rejoiced and grieved. He was the life of the family and every party he ever attended. Fun, passionate for God, an evangelist by the Holy Spirit’s gifting, and always the story-teller. Yes, you would have loved knowing him. 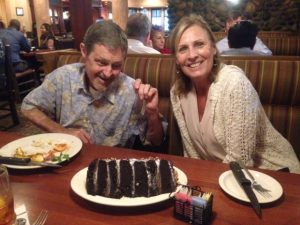 My brother, Chuck, and our sister, Karen

In his walk with Jesus, he inspired us all with his ability to talk to anyone about Jesus and to depend upon God’s strength during those five years of pain and uncertainty. But something he said to me about four years into the journey has always inspired me. When he was told he had six months to live, he said,

I was speechless. What joy in his Savior and what trust and surrender to His plan. Of course, he and all of us prayed for a miraculous healing, and God graciously exceeded the doctor’s prediction by another six months for which we were thrilled. But he trusted Christ for being saved many years before and for his earthly and eternal life.

Of course, he wanted to stay on earth. He didn’t want to leave any of us. He hoped he’d see a grandchild before he was called home. But he was at peace. And the thought of seeing his Savior in person strengthened him to walk into eternity. And he remained in that peace until the end, representing the Lord.

Has someone said something to you that inspired you? Would you share? Then we’ll all be inspired.