God Empowered Me to Forgive My Father-in-Law

God empowered me to forgive my father-in-law. 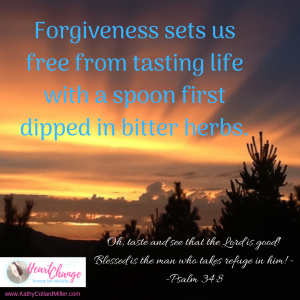 But for several years I had worried that God would “transform” me spiritually by requiring my husband, Larry, and I to take care of his father, Don. For me, I wondered if that would be the way God would eradicate the resentment I held toward Don.

For the greater part of our marriage, Don was involved in a weird religious sect. He didn’t want to celebrate Christmas with our children, and he made our visits to his home filled with tension as he dogmatically spouted his ideas about religion. I felt angry that he hurt Larry’s mother so deeply and that he wasn’t the spiritually encouraging grandfather I wanted for our daughter and son.

Over the years I tried many times to forgive him, but it was a many-layered bitterness in which I went back and forth, forgiving him and then getting angry again.

Throughout those years I thought, “I’ll bet God is going to make it necessary for me to physically care for him in his old age. That will most likely make me become tender towards him. Will I be able to do it?”

Then a miracle happened. Don turned back to believing that Jesus is the only way of salvation. He became a changed man,  joyful and loving, but he never acknowledged the hurt he had caused our family.

Two weeks after we celebrated his ninetieth birthday, Don suffered a brain aneurysm and went into a deep coma. That was a Tuesday. As he hung on, I could see the writing on the wall. It was all happening just as I had worried.

In my devotional time I felt led to write Don a letter. I wrote:

“Dad: I am very angry with you for dividing our family. I hated you for being so obstinate and opinionated. For being selfish, thinking only you had truth. For not being a listener and not showing concern for others. You hurt your own wife, you hurt your son, you hurt me, and you diminished a good relationship with your grandchildren because of your selfishness and self-focus. I am angry that you ruined our family closeness. For many years we couldn’t approach you because you were so determined to spew your lies. You separated yourself and chose your religion over your family, studying in your room and going off to your services while we visited.

Although you haven’t acknowledged the pain and hurt you caused our family, you have tried in your own way to make up for the past. In turning back to the Lord, you allowed God to make you a new creation—full of joy and enthusiasm and love for others. I want to forgive you and be cleansed of my anger, bitterness, and resentment toward you. I forgive you. I release needing you to acknowledge your error and its consequences. You did the best you could with the dysfunction within you. I release you from having to admit your error. Oh Lord, oh God, help me to truly release my bitterness and forgive him.”

I paused and then continued writing:

“Dad, I will gladly care for you until you leave this earth. I love you. I care about you. Thank you for the gift of your son who is precious, valuable, and important to me. We will miss you. I will miss you. I’m glad I will see you again in heaven. I release you.”

I knew God had done an important healing in me. On Saturday we visited him and I whispered in his ear, “I love you, I forgive you. You can go to Jesus in peace.”

The following Tuesday he did. It turned out he could stay in the hospital and God didn’t require me to care for him in order to forgive him. I don’t know why God spared me from having to care for him, but I know I could have done it with love. I was no longer afraid.

How have you been empowered to forgive and live in freedom?

PS. Beverly was the winner of the drawing for Mothers In Waiting. Congratulations, Beverly!