Jesus Can Be Our “Tent Peg” in This Uncertain Time 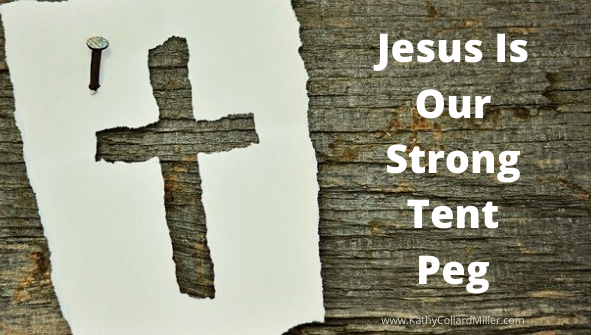 Recently, someone commented on a blog post of mine from 2016. I was so blessed that somehow a woman found my post and the Lord used it to minister to her. I couldn’t remember much from what I wrote about the Bible’s reference to “tent peg” so I looked up my post.

As I read it, I thought, “Wow, this could help us all in this uncertain time. So I’m reposting it and praising God that it might be re-used by Him.

Here’s what I wrote:

I love words! And I love finding out the meaning of seemingly obscure words in the Bible. For instance, what in the world does the word “nail” or “tent peg” in Zechariah 10:4 mean:

This verse refers to Christ and I was curious about the “tent peg” reference. In some Bible versions the word “pin” or “nail” is used. The word “nail” was particularly curious to me.

Here’s what I found. One commentator says the Hebrew word yathed can refer to:

It’s definitely the idea of supporting and providing a strong load-bearing resource.

Curiously, this idea of a nail or tent peg is mentioned other places, although not to Christ, but to other people. Isaiah 22:23-24 tell us about God choosing a man named Eliakim to be a “peg.”

“I will drive him like a peg in a firm place,And he will become a throne of glory to his father’s house.
So they will hang on him all the glory of his father’s house, offspring and issue, all the least of vessels, from bowls to all the jars” (NASB)

Unfortunately, he failed at the task. Isaiah 22:25 tell us,

“In that day,” declares the LORD of hosts, “the peg driving in a firm place will give way; it will even break off and fall, and the load hanging on it will be cut off, for the LORD has spoken.”

Although Eliakim failed, we can depend upon Jesus as our peg and nail because He will never loosen His grip on us nor be pulled away from His working in our lives.

P.S. If we’re looking to another human person to be our tent peg or nail, guess what? He or she will eventually be like Eliakim. Not capable of pulling the load of being our strength and provision. Only Jesus is strong enough.

How do you rely upon Jesus as your strong tent peg in this uncertain time?

(Thank you to congerdesign’s photo I found at Pixabay.com which I used for my meme)