So many of the stories in the Bible are examples of God multi-tasking. 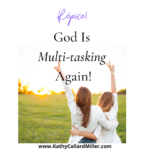 As God prompted His people to write His Word, He most often had more than one purpose. He was multi-tasking! That’s certainly true of the story of Elijah asking for water and food from the widow of Zarephath (I Kings 17:8-18). She was a Gentile and lived in the country where the wicked Jezebel came from.

At the time God told Elijah to go to Zarephath, the drought had been going on for six months. The drought was God’s judgement upon the people of Israel to motivate them to turn from various sins including worshipping and trusting in other gods, like Baal. One of the primary reasons the people had turned away from Jehovah was because evil King Ahab was influenced by his wife, Jezebel, who was from the nearby pagan country of Sidon. She created places for the Israelites to worship her primary god, Baal, who was believed to be the storm god.

The people of Sidon believed when there wasn’t rain, Baal had died and would come back to life later–if they earned it!

God chose a lack of rain specifically to make the point he controlled the weather, not the false god Baal. Everything God does has a purpose to teach about who he is and how we should respond to him. Ironically, the drought spread to the very country where Baal, the storm god, was worshipped. God was multi-tasking.

In a most unlikely move, God sent Elijah to Israel’s enemy territory, the country of Phoenician Sidon, where the wicked Jezebel grew up. Elijah must have been challenged to believe God would take care of him among his enemies.

God’s decision emphasized His own sovereign power to provide what Baal couldn’t for this poor widow. She expected to die along with her son. Yet the living God saved her life, along with her son. And then later when her son suddenly died, God used Elijah to raise him from the dead.

Most likely this widow was not a believer in Jehovah, yet she was willing to die sooner to feed Elijah. Even though Elijah had promised she would be taken care of, we wouldn’t expect she would believe him, yet she did. She risked a lot to obey a hated foreigner.

This woman was raised to worship and trust in gods like Baal who supposedly could raise the dead. Yet because of her previous encounter with Elijah, she didn’t go to Baal to ask for her son’s healing, she went to Elijah. It would seem she had begun to worship Jehovah, the God of the Israelites. And God kept his promise by empowering Elijah to bring her son back to life. Something Baal couldn’t do because he wasn’t real.

Whenever we read the accounts in the Old Testament, we should be thinking in terms of the ways Jesus is represented and referenced even in subtle ways.

In this particular story, we see how God is using the story of Him providing for the Gentile widow to point to the future when Jesus’s sacrificial death applies not only to His own people, but to Gentiles as well.

By the way, if you like to hear about archaeological evidence, like I do, here’s a tidbit. Archaeological finds have uncovered evidence of the city of Zarephath including pottery items described in this account. The bread the widow made was cooked either over an open fire or in a clay conical oven known as a tabun. There is also archaeological finds of those ovens.

What have you experienced that shows you God was multi-tasking in your life? TWEET THAT!!!!