I’m very excited to feature Deep-Rooted: Growing Through the Gospel of Mark by Kathy Howard for this month’s book drawing. Kathy is a powerful Bible teacher and I personally 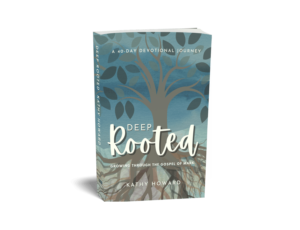 gained much from this book.

Here is a sample from Deep-Rooted to whet your spiritual appetite.

Hope in the Most Desperate Times
by Kathy Howard

Desperate people do desperate things. This real-life observation plays out in the 2002 movie “John Q Public.” Denzel Washington stars as John Quincy Archibald, a desperate father struggling to help his dying son. The boy needs a heart transplant but the insurance company denied the surgery. So, in desperation, John takes the emergency room staff and patients hostage, demanding the doctors save his son.

Have you ever been that kind of desperate? In that place where you’ve tried everything and you’ve got nothing left but last resorts and hail Marys?

The fifth chapter of the Gospel of Mark, tells the story of two people with nothing in common but desperation. A frantic father trying to save his daughter. And a demoralized outcast with nothing left to lose. Both driven to do something they wouldn’t normally do.

Jairus, a respected leader in the local synagogue, humbled himself before Jesus, the controversial Teacher, to beg for his daughter’s life.

Then came one of the rulers of the synagogue, Jairus by name, and seeing him, he fell at his feet and implored him earnestly, saying, “My little daughter is at the point of death. Come and lay your hands on her, so that she may be made well and live.” Mark 5:22-23, ESV

And the woman. Plagued for more than a decade by a condition that drained all her financial resources and marked her “unclean,” risked public shame to simply touch the hem of Jesus’ garment.

She had heard the reports about Jesus and came up behind him in the crowd and touched his garment. For she said, “If I touch even his garments, I will be made well.” Mark 5:27-28, ESV

Two very different people, but both exercised faith in Jesus.

Nothing in Scripture is coincidental or haphazard. Mark intentionally wove together these two personal stories to double the impact. Both these miracle-seekers felt fear, grief, discouragement, and hopelessness. Then through faith they both experienced hope and new life. A miracle within a miracle, all wrapped in the power and authority of Christ.

Jairus’ daughter lay on her deathbed, but Jairus believed Jesus could heal her. He had heard stories. The woman had suffered from constant vaginal bleeding for twelve years. According to Jewish Law, her unclean status prevented intimacy in a marriage relationship, denied her access to corporate worship, and severely limited her social interaction. She had nothing to lose. But so much to gain.

On Jesus’ way to heal the girl, the woman reached out in faith and experienced His healing power. Jesus knew who had touched His robe, but He sought out the woman for her sake. She needed more than mere physical healing. And Jesus met those needs – peace, community restoration, and a name that showed her worth. “Daughter.”

And he said to her, “Daughter, your faith has made you well; go in peace, and be healed of your disease.” Mark 5:34, ESV

Seemingly, the delay prevented Jesus from healing the girl in time to save her. But God is never late; the delay had purpose. And the girl’s death was no obstacle for Jesus.

Taking her by the hand he said to her, “Talitha cumi,” which means, “Little girl, I say to you, arise.” And immediately the girl got up and began walking (for she was twelve years of age), and they were immediately overcome with amazement. Mark 5:41-42, ESV

Although the girl’s death inflicted deep grief on her parents, it also provided an opportunity for God to bring more glory to His Son. Jesus worked two miracles that day. Healing for brokenness. Life for death.

With what seemingly insurmountable obstacle do you need to trust Jesus today?

Lord Jesus, with You no problem is insurmountable, no desperate situation lost. I place my faith in You as the One who is always able, the One who brings hope to the hopeless, and the One who overcomes death with life. Amen.

If you want to experience regular spiritual nourishment from the Bible, it is possible!  Deep Rooted, a 40-day devotional journey through the life and ministry of Jesus, will show you how to interact with and apply Scripture, not just read it. These meaty, daily devotions use a simple study framework designed to help you:

To enter your name into the drawing for Deep Rooted, make a comment on my blog post. The drawing ends Sunday March 14, 2021. Only USA addresses can win. UPDATE: VICKI IS THE WINNER OF THE DRAWING. CONGRATULATIONS, VICKI! 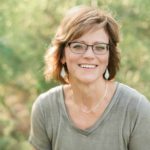 A former “cultural Christian,” Kathy Howard now has a passion for God’s Word that’s contagious. With more than 30 years of experience, Kathy has taught the Bible in dozens of states, internationally, and in a wide range of venues including multi-church conferences and large online events. Kathy, who has a Masters of Religious Education from the Canadian Southern Baptist Seminary, is a devotional and Bible study author. She also writes for multiple online magazines and devotional sites. Kathy and her husband live near family in the Dallas/Ft Worth. They have three married children, six grandchildren, and two accidental dogs. Kathy provides free discipleship resources and blogs regularly at www.KathyHoward.org